OK, folks, continuing with the motorcycle ride reports, here is a quick rundown on my IBA 50CC ride.

OK, folks, a quick update on my IBA 50CC ride. On October 28th @ 3 AM, I met with my friend and fellow IBA rider Steve in Old Town San Diego for the start of our coast to coast motorcycle ride. We needed to go about 2,300 miles in under 50 hours. Depending on how the ride went, we considered hitting the road almost immediately after arriving in Jax Beach and returning to San Diego to complete the 100CCC (coast to coast to coast in 100 hours).

SPOILER ALERT: We did not end up attempting the IBA 100CCC.

We hit the highway (I-10) after filling up and getting witness forms signed by the gas station attendant. We also snapped the very bad photo attached to this message! 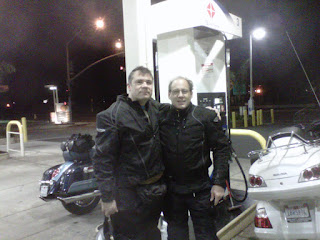 Unbeknownst to me, Steve had gathered water and sand from the Pacific a few minutes earlier. Oh, well, I guess I skipped that part.

We hit the I-8 east and were over the mountains and in Yuma by our first stop. The sun was coming up and we were making pretty good time. The weather and traffic cooperated almost the entire time. It was a bit chilly throughout the ride (until East Florida) and we ran into some construction in Louisiana. Nothing major, either way.

We arrived in Kerrville, Texas, about 1,200 miles and 19 hours after we rolled out of San Diego. Tired and cold, we checked into a hotel and were asleep within minutes. The alarm sounded 5 short hours later and we were on the road in 20 minutes, en route to Jax Beach.

All gear was working perfectly. My Triumph Rocket III Touring was humming along nicely and my new Garmin Zumo 660 GPS unit was loaded with over 250 rockin' tunes, pumped into my helmet via my Cardo-Scala BlueTooth (glad I brought so much Southern Rock), but I longed for my heated vest--resting on my bed at home where I inadvertently left it. Steve had brought along a SPOT tracking device to let friends and family follow our progress on-line, but the unit wasn’t functioning properly.

We ran into heavy stop and go construction traffic in Baton Rouge, near the I-10/I-12 split. My GPS routed me to side streets as a detour, but the locals had already thought of that. An hour later, we were back on the I-12 and moving along.

Our 5 to 10-minute stops usually consisted of: A quick snack (banana/granola bar/juice) while gassing up, logging receipts on IBA forms, using the restroom and checking routes. The vast majority of our stops were under 7 minutes.

We saw few traffic enforcement folks on the highways and rarely slowed down to see the scenery. We passed a few vehicle accidents—some were a little too close.

We arrived to Jax Beach at about 5 AM, filled up to get the "close-out" receipt and headed straight to the hotel. We'd been riding for about 46 hours and 2,300 miles--well under the 50 hours allowed. The weather was warm and no one was on the road. It was time to check in, get the witness forms signed and hit the sack. We decided then that we wouldn't attempt the 100CCC, but take the long way home to enjoy The South, instead.

I woke up 6 hours later, refreshed and ready to ride. We ate some BBQ and plotted our route back to SoCal, specifically to avoid the I-10. The I-20 was selected as a great alternative and we were off and riding with Montgomery, Alabama -- 400 miles away -- as the intended stop. We arrived to Albany, Georgia 200 miles later as the sun was setting; it looked like a good place to stop and enjoy some Southern Comfort. We were swept into a large southern wedding reception taking place at the hotel. Those fine folks made us feel welcome as we sipped cold beers and ate fried green tomatoes.

We were up and rolling early, headed to the I-20 via Selma, Alabama and Meridian, Mississippi. We saw some historical sites and interesting characters along the way.

I'll tell ya, the I-20 is a sweet little piece of slab. It wasn't in as good of condition as the I-10, but it was a much more laid back ride. The weather cooperated all the way home (no rain) and we encountered no heavy gridlock, day or night. I never intentionally did the speed limit, opting instead to move with the flow of traffic (that’s 80+ MPH in Texas). We saw dozens of deer along the road---some were even alive. The deer whistles I installed on my bike last year must be doing their job as I never had any run in front of me.

We reached Deming, NM, late on November 1st and decided to stay there and get an early start on the final leg of the bike ride. By 6 AM the next morning, we were already 30 miles down the road watching the sun some up over the desert. We parted ways in Yuma as Steve wanted to sit down and eat (and rest) while I needed to get my bike to the dealer in San Diego by 4 PM. I made great time through El Centro and over the mountains, arriving at the Triumph dealer by 3 PM. I had ridden about 4,700 miles in 6 days and had racked up another IBA title: The Iron Butt 50 CC.

This is my 3rd IBA ride and, as much as I enjoy them, I'm tiring of them. Literally.

A rider doesn't see a lot of the country when going really fast. At night. On freeway slab.

I think I'll look at more interesting motorcycle tours in the future: Canada and Alaska, the National Parks, the Pacific Coast Highway. I'll keep you posted... 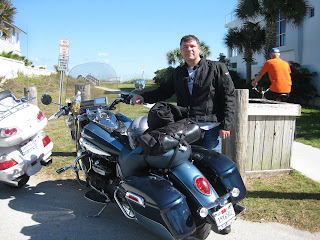