My Asphalt Adventure with Exciting Photos! 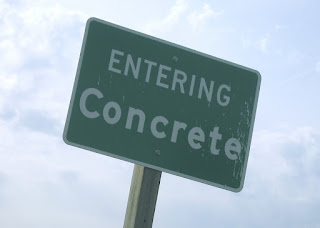 I thought I'd add a little story about my high-side "get-off" earlier this year. I'm patched up and so is my bike, so here's what happened:

While out with some friends on Sunday, March 13, at about 2 PM, I took a pretty good spill on some beautiful California backroad asphalt. 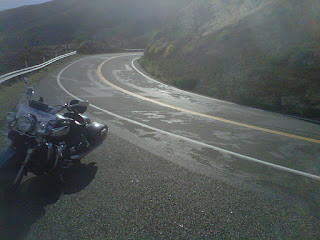 I was on the S-22, about 4 miles west of Borrego Springs, heading up the Montezuma Grade at about 50 MPH, when my rear wheel lost traction while in a steep right hand turn.

These photos show the turn, post-accident. The terrain, road conditions and weather are shown pretty clearly. 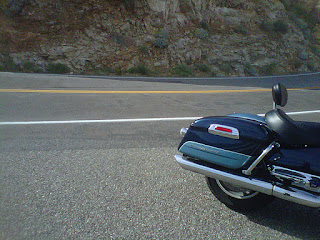 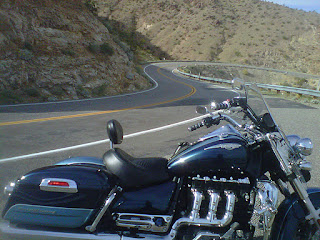 I might’ve hit gravel, a stone or oil. Might've been those ultra hard Dunlop E3 tires. Whatever it was, the bike fishtailed and I was thrown fairly violently into the oncoming lane. I was extremely fortunate that no cars were approaching or I wouldn't be writing this. I went airborne, landing on my back and left side. I was able to immediately stand up, though the wind was knocked out of me. My helmet and jacket sustained considerable damage. 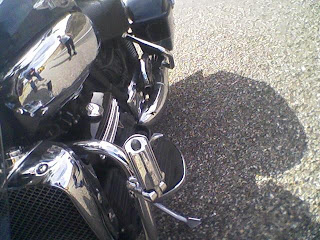 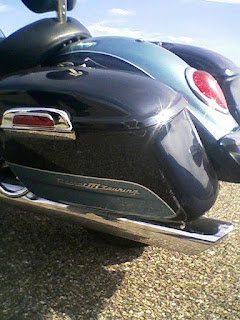 The tow truck arrived 3 hours later while I picked up bike parts and nursed my wounds. 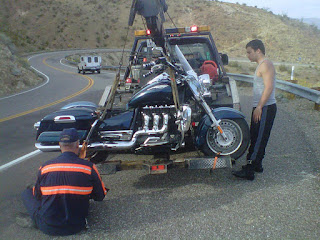 I was sore but nothing was broken. Busted up foot, back and shoulder. Road rash on my back and both legs. My Joe Rocket helmet, Triumph jacket and Sidi Canyon boots took most of the damage. I was sore for a while.

The bike sustained surprisingly minimal damage. It was actually less than $1000, and that includes new chrome parts and some painting. My mechanic, Ivan @ Ivan's Fast Bikes, took care of everything as I recuperated. He replaced what needed replacing, fixed what needed fixing and contracted the paint work. The total ended up coming in about $200 less than his initial estimate! How do ya like that? There was no frame damage, so the repairs consisted mainly of replacing the crash bars, handlebars, clutch lever and some cosmetic repair to a side bag. Since I didn't tweak the frame or forks, it wasn't an insurance job.

I arrived home about 5 hours after the accident and cleaned up, hoping to dodge a hospital visit. Unfortunately, the pain was progressively worse, and I had banged my head during the fall, so it was off to the ER at 10 PM; we were there until 5:15 AM, as I suspected would happen. The kind medical profesionals at Kaiser ran a full battery of tests to rule out head, neck, and spleen damage. Lots of road rash and bruising--and a sprained ankle--but nothing broken and all tests looked OK. 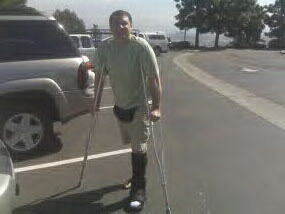 Bottom line: The old guy was very sore--everywhere--after a near-disastrous 50 MPH get-off. I doubt I'd have been that sore at 25 (years old or MPH).

I was in a temporary cast pending an ortho visit to determine if a hard cast was needed or not; on crutches and some great pain meds. I was back to work after a couple of days' rest. My pride required physical therapy but recovered... nothing was broken except my ego. Road rash and soreness all over.

The safety equipment did its job. I was fortunate. I'll take this as a wake-up call to slow it down in unfamiliar territory.

My family and friends came through with calls and texts and much-appreciated prayers.

So, a question for the peanut gallery: Is it true that there are two kinds of riders? Those who have gone down and those that will? Ouch...

My bike gave me a few problems (as you'll see from ride reports since the accident) and I'm wondering if the fall and subsequent repairs had anything to do with it. Regardless, I'm back on the old steed and ready for new rides.
Posted by Dan Diego at 9:31 AM