Get your kicks on Route 66

The lyrics of this very fun road tune are all about The Mother Road: US Highway 66.

This is still very rideable, if only for nostalgia's sake. I've ridden parts of this historic stretch of road on motorcycles, though it's now paralleled by other major US highways. Its demise is glaringly apparent and extremely sad. If you're riding along a major US highway, and happen upon a Route 66 road sign, it might be worth a quick detour.

Once the larger highways were built, businesses along The Mother Road were no longer needed and all that's left are abandoned homes, closed-up stores and the occasional souvenir shop (Seligman, AZ is a nice stop). 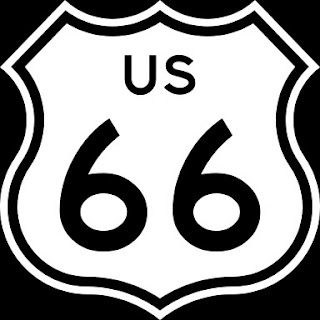 The famous road sign is often the only reminder that the traveler is on the legendary road that once carried hordes of post-war travelers West, from Chicago to LA.

US 66 was officially removed from the US Highway System on June 27, 1985 after it was decided the route was no longer relevant and had been replaced by the Interstate Highway System.

(Get Your Kicks on) Route 66, often rendered simply as "Route 66", is a popular song composed in 1946 by American songwriter Bobby Troup. It was first recorded in the same year by Nat King Cole, and was subsequently covered by many artists including Chuck Berry, The Rolling Stones and Depeche Mode. The song's lyrics follow the path of the U.S. Route 66 highway, which used to run a long distance across the US, going from Chicago, Illinois to Los Angeles, California.

The song mentions the names of towns and cities on the highway that Route 66 passed through, celebrating the romance and freedom of automobile travel.

Of the eight states that the actual route passes through, only Kansas and its cities are not mentioned by the song.

Winona is the only town out of sequence: it was a very small settlement east of Flagstaff, and might indeed have been forgotten if not for the lyric "Don't forget Winona," written to rhyme with "Flagstaff, Arizona."
Posted by Dan Diego at 12:21 PM