Dual Sport Ride: Noobies and knobbies and veterans and carnage. Oh, my.

Well, I asked for it and I got it. Tossed out an idea for a new-to-dual sporting ride on the San Diego Adventure Riders (SDAR) website: www.dualsport-sd.com. Soon after, a veteran rider offered to lead a group of newbies (noobs) on a local ride, just to "break us in" to the local area.

So, on Sunday August 7, at 7AM, we all met at the Carl's Jr in Alpine. Expecting no one but the ride leader (Bike Slut) and two other noobs on big dual sport bikes like my BMW R1150GS, I was surprised to see 9 bikes...5 of which were hardcore dirtbikes (XRs, DRZs, KTMs, etc.). Not fair!

Here's the ride report from the veteran who led us on a 75+ mile ride of the SD area, with a good mix of side roads, dirt/gravel and tough trails:

Wow! This is my first SDAR ride where I didn't know anybody...at first...

I already KNOW I forgot some names... We had a guy on a KTM 525, that seemed to ride very well; he was there with a buddy on a XR650R...both sporting knobbies and looking like they knew which side was up

Steve and his buddy Fred (who coincidentally I used to work with) were on new KLR 650s.

We had a guy waiting approval on a 600R with knobbies.

He's quite the looker himself, but NOT GAY. 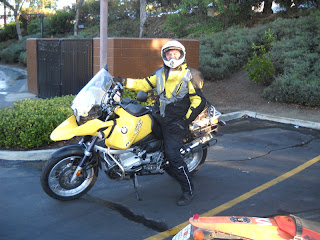 On the Viejas Grade and Pine Creek. 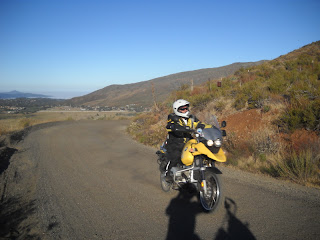 Here's one of the re-groups. 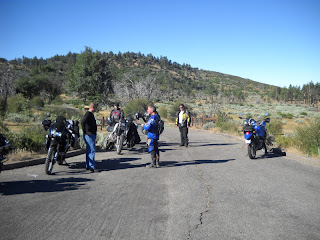 And then... the carnage ensued. 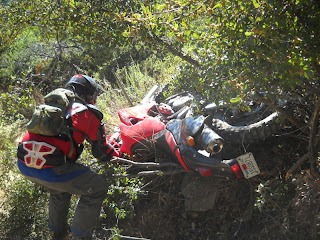 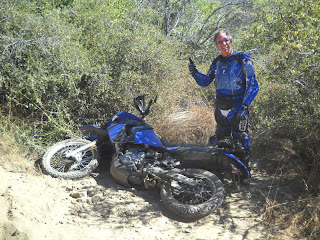 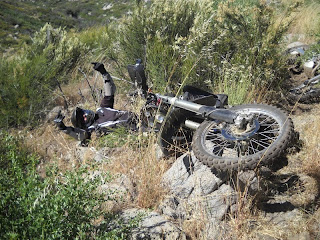 The last one technically isn't from this ride but I like the picture.

All of those last wrecks were from the Kernan Trail at the Corral OHV riding area. I wisely stayed clear of it on my big yellow pig of a bike.

Steve, one of the newer riders, proved to be a tough guy! He must've dropped his KLR 5 times... every time picked it up, got back on, and tried the same obstacle that tossed him... and it was HOT... the bar-end caved in and was stopping his throttle from returning to idle, resulting in a bit of a flip... THAT resulted in a bent clutch lever. His bar was actually bent at the end, which meant we could even remove the bar-end to fix it. but he soldiered on...

After Bob got done beating everybody up he put us in detention. 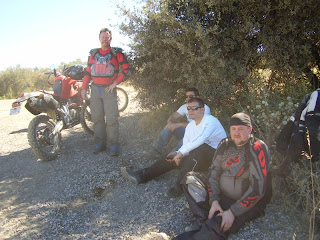 We all had to take a manners class before riding. 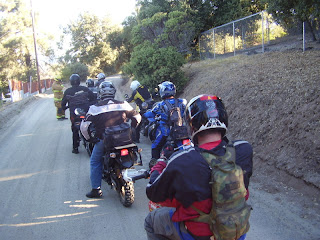 A couple of captions- the upside down XRR- he was going up Kernan...on one of the steep ups, he either hit a rock or ledge and/or grabbed some throttle- bike went forward, front end up, then to the side- impressive indeed...he did injure his ankle a bit, but confirmed he was ok before I snapped a pic- his bike was upside down, facing downhill and tangled in brush...at first I couldn't figure out why it was so heavy, but there were vines holding it down.

The fire fighter pic- they stopped us at the top of Viejas Grade...pick-up truck had slammed into a utility pole...he told me "pole is about knocked over and it is too dangerous to proceed." I told him "we are San Diego adventure riders...we laugh in the face of danger...we are riding dirtbikes with street tires...stand aside and let us through"

He sized us up, and figure he should let us pass...said something about some guy named "derwin" as we rode away

It was nice to have so many new members along, and I hope everybody had a good time...

Had a great time today... learned a lot and really appreciated the ride leader's help and pointers. Looking forward to future rides and building skills.

A rider from another group commented that he met the crowd coming down from Four Corners and had an "almost" moment with a Yellow Hippopotamus. Glad I was hugging the inside line. (That was me.)

Steve on the KLR... in retrospect, he probably should not have ridden Kernan, but as he put it "that's why I got a KLR and joined... to push the limits and learn some stuff".... I am sure he learned a lot, and saw a little of what the KLR can do. Once his bar bent, he had his hands full, then when his clutch bent he was really handicapped. I offered to switch bikes the rest of the way up, but he sacked up and said "nope; I'm going to do this." I really did not expect any carnage, but we ride dirt bikes... stuff happens

I want to jump on the bandwagon of those thanking the ride leader for a great ride. Your experience and patience were much appreciated. Actually, there were some really great riders (everyone but me, really) and everyone was nice and welcoming. The route you picked was top notch and I know I'll be getting out there again soon. The Kernan? Maybe not quite yet.

BTW: The way you chose to ride the day with street tires for a couple of noobs was classy.

responds the Ride Leader: Ok, everybody keeps beating me up about the Kernan...The Kernan was absolutely not the plan...but we had 3 guys with knobbies that could obviously ride dirt and aspiring dirt riders on bikes totally capable of the Kernan. I "suggested" that Dan not attempt Kernan on his 1150 and double-checked with Aaron (GS650) and Steve (KLR650), then let grown men make up their own minds...I rode sweep and helped pick up a few bikes and coach where appropriate...I offered to ride back down with an injured rider and offered to ride another riders bike through a steep uphill and a rock garden. For anybody that wants legitmate "teaching" I'll be the first to admit I am not a good teacher. Some things that I do well, I have no idea what I am doing.

Some things I do poorly, I don't even know why I do what I do...for every "tough" dirt section on this ride, I had a very pleasant and easy alternative route.

There was NO peer pressure whatsoever (as far as I saw)...

And, as the Paul photo proves- even experienced, talented riders can get upended at times...everybody seemed in good spirits at the last check and Steve wasn't crying about bike damage or dehydration...he was contemplating taking a rawhyde class (carguy and ride-orange teach also)...

All in all: I will call the ride a success...bubbagums was the rider on the 525...I let him lead most of the dirt sections and he did great! His buddy on the 650 rode well, other than one fairly bad tip...

Ray on the 600R overcooked the TIGHT left turn on morena stokes...could happen (has?) To anybody...

So: lesson learned for me...next time, I'll give a little more warning on Kernan...it is a tough call with people you don't know- they had all navigated Deer Park easily, but maybe Kernan was a little too big of a next step. Next week-intermediate dirt ride

Says the new guy with the (once) clean and new and undamaged KLR650: No complaints from me whatsoever, and I'd do it again -- but hopefully a little better the second time around. I didn't buy my KLR to ride to bike nights looking like a poser (like those raised trucks that have never seen the dirt) -- I do want to get out and explore and build my skills. I accept
that I'll drop the bike now and again and all that comes with that. If I stay entirely in my comfort zone then I won't improve as a rider. The scenery riding up the trail (Pine Creek?) to Sunrise highway alone made
the entire morning worthwhile. I'll get a more experience before tagging along on an intermediate ride so as not to slow others down, but I'd be
game for anything up to and including what we did on Sunday. My KLR still had the original tires (about 50% worn) and I'm getting some more aggressive tires to put on before the next outing. Not sure if that really would have made a difference on this ride, but I think I'd have been more
confident in what the bike could do with my limited experience level and perhaps helped with the mind over matter in the more technical parts. Can't say enough to thank the ride leader for a great ride and his patience and help!
Posted by Dan Diego at 7:04 PM No comments:

I leave San Diego in the morning and head about 75 miles on the I-8 east to the S2 and the little town of Ocotillo. I pass through less than a mile of the town's poorly-maintained streets and unnecessary stop signs as I make my way to the start of the desert road.

There aren't many roadside amenities, so pick up gas before you go. There are a couple of gas stations in Ocotillo at S2 and Interstate 8. A couple of campgrounds along the way with meager mini-marts and NO gas. The Lazy Lizard bar

is a real gem of a desert pub in Ocotillo. At the other end of S2 in San Felipe, several miles before Warner Springs, The Log Cabin has great food and cold beer but has no normal operating days and hours. Well worth a stop when they are open. Beware that it is VERY HOT in the summer. Take lots of drinking water and a cell phone (although service is spotty). Enjoy snacks and cold sodas at the Butterfield Station convenience store while you look at the old fire trucks.

You'll see some fine scenery along the way, including fantastic panoramic views of the Laguna and Volcan Mountains and desert shrubbery (awesome blossoms in springtime). Part of the route follows the Old Butterfield Stage Route which can be easily accessed. Old stagecoach wheel tracks still survive after almost 150 years. The pink desert hues of the Borrego Badlands can also be seen from an overlook along the highway. 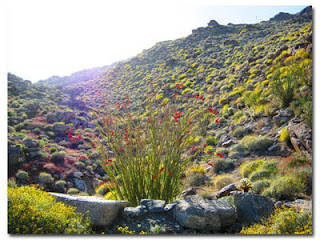 Look for the best wildflower blooms from March 27 to April 2, though they can bloom as early as mid-February. 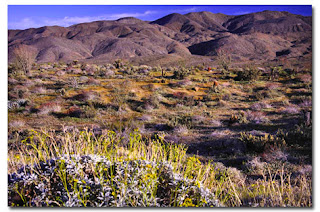 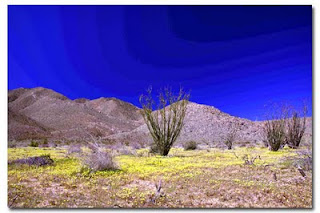 Road Quality: The road is normally kept in great condition. There are some long, straight stretches intermingled with many great, fun twisties. Watch for the Border patrol checkpoint and sand on the road. As well, be careful of a few tight sweeping turns as the road was built in an original desert roadbed and remains flat throughout some of the turns with little to no bank angle. It's not hard to hit 100+ MPH on the straightaways, then come into the turns...

An alternate route for those coming from the north or east: From Warner Springs, about 60 miles northeast of San Diego, head southwest on hwy 79 and then get on S2 (San Felipe Rd) heading south. You'll cross hwy 78 and continue on S2 heading south and into the Anza-Borrego Desert Park finally ending up in the town of Ocotillo and at Interstate 8. I encourage you to turn right around (after gassing up) and doing it again in the other direction as you will be amazed at the difference in panoramic views.
Posted by Dan Diego at 2:53 PM No comments: