Motorcycles made from naked ladies. Wow!

Does anyone else find this pretty cool?

Check out the bodywork on these motorcycles made from naked ladies. 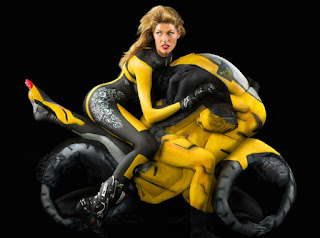 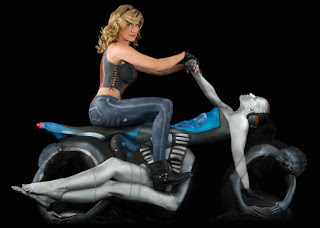 What the subjects lack in clothing, they make up for in flexibility. Hypoallergenic paint is used in a process that can take 18 hours, the models alternating between posing and being painted.

The conceptual pieces will tour the country with the Progressive International Motorbike Show. 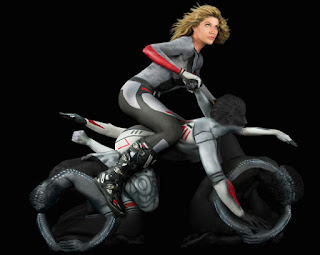 Anyone care for a ride?

They won't take you very far, but these bikes will look better than any Harley parked in your driveway. Led by body-painter Trina Merry, a team of air brushers (and, yes, two massage therapists) turned a group of models into three human motorcycles for the Progressive International Motorcycle Show tour.

Actually, they weren't model models: They were mostly dancers, yoga instructors and circus performers capable of contorting themselves into the shape of wheels, frames and saddles for shoots that lasted up to 18 hours.

Oh, and if you hadn't noticed, they're naked. Vroom.

Fast facts about the shoot:

After the jump, watch the behind the scenes video on the making of “Human Motorcycles”

Beer and Muddy Clothing in North Tampa:
How to Lose a $1000 Deductible on a Rented Harley Davidson

Oh, it was a pretty little bike. A big bike, really. A clean Road Glide with 625 miles on the odometer. 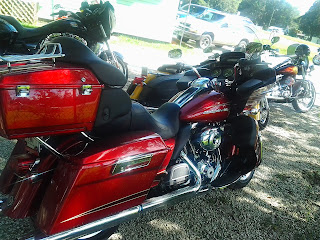 I rolled out of Tampa Harley Davidson with a smile on my face, hope in my heart and a helmet on my noggin. All three would shortly disappear, as sure as the thunder, lightning and 100% humidity would take their place. 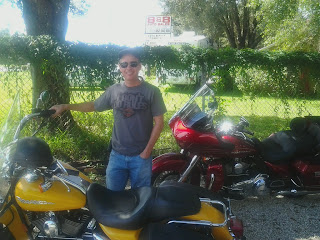 There were four of us ready for an Epic Bike Ride that morning: Joining me were Darren on a Road King, Johnny on a brand new Victory Cross Country and Bob on a Yamaha Royal Star (not their real names*). I know now that I should have captured the 4 of us on film before we began our adventure; the moment is gone, but for our memories of the way we were.

The route sounded nice enough. A 100+ mile ride through Northeast Tampa’s back roads. It was to be “Old Florida” with lots of Spanish moss, swampland and questionable biker bars. And that would’ve been oh, so nice. Ah, but it was not to be…

We departed Darren’s place after two cold beers at about 9 AM, en route to the Sail Inn for more cold ones. When does the riding begin? Wait for it, my friend, wait for it. I’m getting to that.

Situated off the 41, the Sail Inn is your typical biker bar…if one defines “typical” as “uber-dive” atmosphere with dollar drafts from 10 AM to 6 PM. The gravel parking lot was wet and muddy and I hoped that I wouldn’t get my purty bike too dirty. Little was I to know that my rented Hog would never be cleaner than it was at that moment.

We tossed down a couple brews and listened to the jukebox playing Johnny Cash’s Sunday Morning Coming Down. It was an omen, as sure as the distant thunder accompanying the Man in Black’s vocals; I dismissed the warning as I’d earlier dismissed the weatherman’s dire predictions. Fool was I…

Let me tell you now that ride that followed resembled “Deliverance” on two wheels. My friend Darren—in the role of Ned Beatty—was leading the pack on his shiny Road King. It wouldn’t be shiny for long. Nor upright. But I’m getting ahead of myself.

Off we rode. Away from the Sail Inn, and through some fine Florida back roads. From the look of the waterlogged fields, the area had seen some heavy rain recently. I barely noticed as we left the pavement and continued on a hard-packed dirt road. That road soon turned into an even shoddier road. And that gave way to what could best be described as a horse trail. 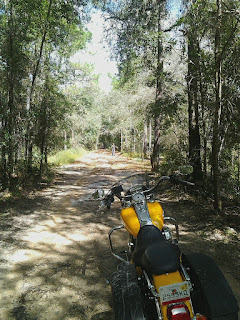 “There’s only a half-mile or so of this,” stated Darren.

And onward we rode.

It was only a few hundred yards later that we encountered the first (of many) large mud puddles blocking our forward progress. I was dubious, but Darren pressed on, assuring us that the GPS indicated this short cut would quickly bring us to a paved road and better riding. Epic Riding was the term I recall.

We rode our large bikes into the woods and around the puddles. Following muddy deer trails in a nature preserve—on a large touring bike, no less—was not my idea of an epic ride, but I’m not from around there. I’m a city boy from Southern California. What do I know from Epic Motorcycle Rides? And on we went.

“Johnny’s down!” I heard Bob yell from behind me.

For the record, I would hear that four more times in the next hour.

Did I mention that Johnny had purchased his shiny new Victory touring bike the day before? We all ran back and brought the black behemoth to a more vertical position. Johnny was muddy, maybe muddier that his bike, and didn’t appear as jovial as he’d been not 30 minutes prior. 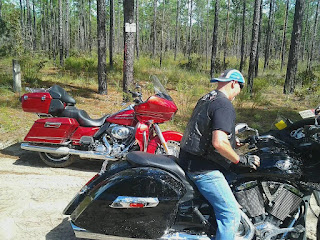 “Should we turn back?” one of us asked Darren.

And none of us wanted to go back through THAT.

Looking back on the event, we really should have turned back. As THAT was so much better than what we were in for.

For the next hour, we approached and circumvented numerous water obstacles, all to the repeating chorus of, “Johnny’s down!” and “Bob’s down!”

As I would run back to assist the muddy, angry rider, I’d think: “I can’t drop this bike. I’m responsible for the first $1000 of damage.” And so it was.

We were stopped at our 15th or 20th mud puddle; Darren and I had bypassed it, Bob and Johnny were contemplating a path to the right. Or possibly mutiny, it was tough to tell from the mud on their faces.

Regardless, along came a Jeep. Just a local good ol’ boy out 4-wheeling with his son.

“Man, those are some nice bikes! Are those dirt bikes? They don’t look like dirt bikes.”

We all stood there silently and returned his amused gaze. We were in no mood for happy banter, let me tell you.

“Ha ha, I’ve been out here a lot and I ain’t NEVER seen bikes like those out here. Where are you headed?”

We informed him that we were continuing straight ahead, to the paved road.

“Up there?” he pointed at the path ahead. “Nah, there’s nothing up there but a few more miles of horse trails.” His young son nodded from the passenger seat of the Jeep.

We assured him that our GPS showed a paved road not a half mile ahead.

“Well, you can do that, but I’d take this here trail to the right and head down this path. I live right up there and that’s where the road is.”

We all looked at him and then to Darren.

Then he added: “And I sure hope it don’t start raining again.”

I’ll let you know right now that we took the trail recommended by the local, not by the Garmin GPS. And, as Robert Frost so aptly put it, “that made all the difference.”

In two short muddy miles— where I heard, “Darren’s down! Bob’s down! Johnny’s down!” for that last time that day—we arrived to a real road. Not a paved road, but at least a less muddy one.

We pumped our arms in the air, our triumphant shouts of relief heard only by the amused forest critters.

In less than five miles we arrived to civilization and a convenience store, a sight to behold. Chrome and leather and sweat and mud. We probably looked as pathetic and beaten as we felt. We drank in some cold water as we assessed the damage. There were no apparent injuries and no damage to the bikes. A true miracle, considering the cross-country route we’d undertaken.

I remain amazed that this group of friends never whimpered once.  No compalints or second-guessing of the route.  I admired this and chalked it up to years of riding and drinking together.  Those are the kinds of guys I want to ride with!

Our pride left on the side of a tree, our spirit at the bottom of a mud puddle, we shook hands and rode away separately. We knew when we’d been beat.

* These are indeed their real names; I just wanted to spare their shame for a brief moment.
Posted by Dan Diego at 5:40 PM No comments:

These are pretty much my same thoughts as I'm out riding...