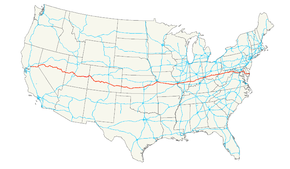 It stretches more than 3,000 miles from Ocean City, Maryland to Sacramento, California.

I spent 3 days riding about 1,500 miles round-trip from San Diego to Ely, Nevada to Reno, down to Bishop, California and back to San Diego.  "Just in case," I ordered a Highway 50 Survival Kit listing historical sites, rest areas and, most importantly, gas stops.

The Nevada portion (Highway 50) — referred to as the Loneliest Road in America — roughly parallels the Pony Express Trail, going from Silver Springs through Fallon on its way to Reno.

Check out this description: “Remnants of the Pony Express Route are visible for much of the way. Stretching the width of Nevada, Highway 50 is a fascinating scenic and historic corridor through a land seemingly untouched by man. The road travels through snow-mantled mountains that reach summits of more than 11,000 feet.”


I saw a lot of pretty scenery on the route of mainly backroads I chose, as many ghost towns and historic mining towns were found along the way.

A few of the unusual sites I saw are the Hickison Summit petroglyphs, Grimes Point pictographs, Charcoal Ovens State Park and the singing dunes of Sand Mountain.  And there are a bunch of other cool places to see along the way -- Lake Lahontan outside of Silver Springs, the missile bunkers near Fallon, and miles and miles of nuthin' but lonely roads.

Like some of you may know, I’ve had a few mechanical issues in the recent past.  My motorcycles have left me high and dry in the middle of nowhere (Triumph twice, BMW once).  My motorcycling mojo was gone.  I was frustrated and just about ready to throw in the towel.  Maybe long-distance motorcycling just wasn’t for me.
Before I took up another hobby (underwater basket weaving was an option), I planned one more “test” ride, to see if motorcycling—a pastime I enjoy so much, was something I would continue doing.
I remembered a ride that would fit the bill.  A highway out in the middle of nowhere.  What would be better than getting out and putting my bike to the test? Hmmm.
My mind started working. What if…Could I?...I had some time off available and thought I’d make it a long weekend of riding.

Here is the ride report: 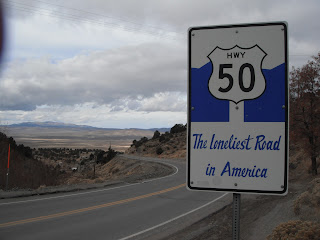 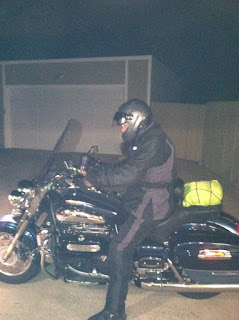 About 570 miles of easy riding today.

The I-15 is nothing but a fast burn from San Berdoo to Barstow to Baker. Nothing to see here, folks. Get your gas and move along. I kept the speed between 70 and 75 most of the way, but there was a sweet spot at 80. Not much traffic.

The weather was brisk the entire way. It was foggy and misty over the Cleghorn Pass but no rain otherwise. It was 70 degrees when I rode through Las Vegas at 10:30 am.

I dropped onto the 93 North off of the 15 a bit past Vegas. What a cool, straight road through the high desert that is. A rider could, if he was so inclined, ride "hands free" for 13.5 miles. Longer really, but it gets boring after that. Ask me how I know.

A gas station clerk in Alamo, Nevada warned me to watch out for the snow. I asked him if it had been snowing. "No, but you should be careful, anyhow." Sage advice. I did see snow at the 7,000' level. It was a bit chillier, too. But my gear did fine so I was OK.

Speaking of gear: I wore my Triumph Acton jacket and over-pants. They're tough, waterproof, warm and have protective armor built in. My Sidi Canyon Gore-Tex boots and Road Gear "Boss" gloves were also warm and comfortable. The Nolan N-102 helmet with Cardo-Scala Bluetooth was perfect and provided me with some rockin' road tunes courtesy of the (140) MP3s in my Garmin Zumo GPS.

My big Triumph is purring like a kitten. A really big kitten. 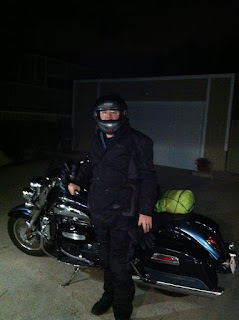 I listened to some melancholy music today.

Now, THOSE are some road tunes.

I settled into the funky (and apparently historic) Hotel Nevada at 3 pm after a 571 mile ride. 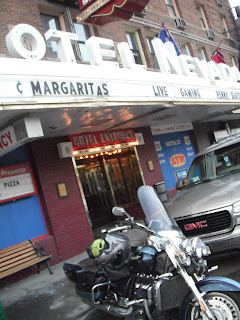 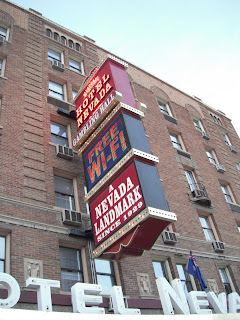 This turned out to be a great day of riding! Just under 500 miles (with only 350 planned). No snow, no rain, just sunny, cold skies.


I would love to tell you that I saw lot of interesting stuff but it was not much more than high desert scrub brush and miles of lonely back roads. And I love that. 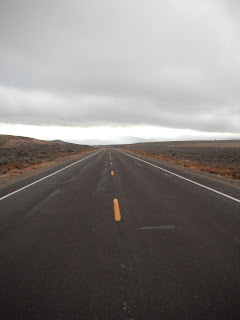 I left Ely at 7 am on a beautiful clear, crisp morning. The sun was shining and the sky was blue and it was a brisk 46 degrees. Lovely riding weather. I passed exactly one car between Ely and . I stopped in for breakfast at a local diner/casino where the locals proved that is indeed the "friendliest town on the loneliest road."

A couple guys stopped and asked me about my Triumph and told me about their bikes. This is something I enjoy the most about riding through the --talking to the locals. I never fail to learn something new about a town from the good folks who stop by to chat and discuss motorcycles.

I realized quickly that most of today's ride would be above the 6,000' level. I never lost sight of the tall, snow-covered mountains to my front and sides. I skirted those beautiful mountains all day...and believe me, I felt their presence. 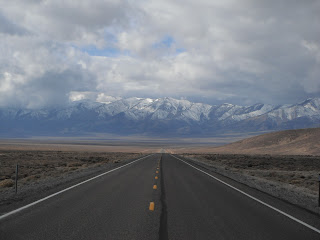 I saw the foundations of long-deserted dwellings on my way to . Some were marked as historical; others just stood sadly by the side of the road. What they might've been is anyone's guess.

About 20 miles east of Austin I pulled off to see the Hickison petroglyphs. There's a small, unhosted site 1/2 mile off the highway down a gravel road (motorcycles be warned). Really not too much to see as the pictographs are faded and the petroglyphs are pretty much worn off. 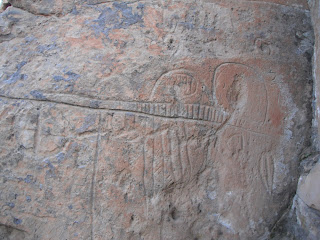 The UFO carved into the sandstone was as amusing as it was distasteful. That was an interesting 15 minutes. 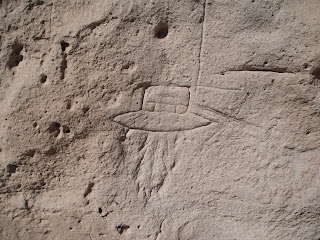 I gassed up in and received my one and only stamp in my Highway 50 Survival Guide from a nice young lady at the Chevron there. 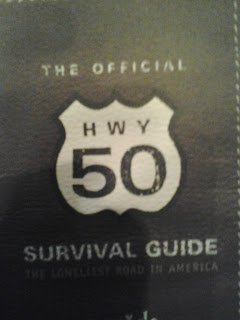 As I was leaving she ran out and asked if I was continuing west. When I confirmed that I was, she warned me to watch for black ice on the a location that rarely sees sunlight. Very kind of her to pass along that info.

I had been told of a bypass shortly after -- the 722. I decided to stay on the 50 and soak up as much loneliness as I could stand. I didn't see anything too exciting, though. Maybe the 722 would have been a better idea. Next time...

Again, nothing too exciting between Austin and Fallon. I passed by but didn't hear the Singing Sands. Maybe they rest their vocal chords on Sundays?

Fallon was by far the biggest of the towns on the 50 thus far. It appeared to be a booming metropolis of cowboys and ranchers. I think I even saw a Wal-Mart.
I continued on to where the speed limits are artificially low. Try driving 25 MPH for 5 miles. I guess towns are trying to boost their revenues in tough times but I don't like it. Caravans of slow-moving vehicles looked on as other drivers were being targeted in speed traps along 's streets. No good.

From there I reached in no time. The wind was blowing and the air was chilly. My Aerostich heated vest kept me warm the whole ride...though my toes were a bit cold.

Once I arrived to I decided I was way too early to check in to a hotel. And I still wanted to ride some more. So I continued on the 50, then turned south on the 395 and rode 200 miles to Bishop. Brrrrr! It gets cold above 8,000 feet.

There was a slew of signs warning of icy/slippery roads. And I saw two snow plows coming down the hill. Well, the road wasn't closed yet so off I went. I have always loved snow in the pines and it smelled great as I zipped over the passes. My tires got a little squirrelly on some ice/gravel/snow but nothing major. Out of and back into CommieFornia.

I arrived to Bishop at 5:30, just as it was getting dark. I found a hotel with parking right in front of my room and called it a day. That makes for a much shorter ride home tomorrow.

All in all it was a fine day of riding. Some may not enjoy the monotony of a road like the 50, but I just loved it. I listened to my music, sorted out the thoughts in my head and soaked up the high desert scenery. Lovely. Just lovely.

Here is a selection of the tunes I enjoyed today:

·         Sleeping Monkey: Phish
·         The Window: Steve Miller
·         Every day is like Sunday: Morrissey
·         24 hours at a Time: Marshall Tucker
·         I want to go to the Sun: Peter Frampton
·         6 days on the Road: Dave Dudley
·         Back home Again: The Mahones
·         And a mess of old blues (RL Burnside, Johnny Copeland, Son Seals, Melvin Taylor)
Day 3: Bishop to
I rolled out of Bishop at 7:45 am under brisk weather and sunny skies -- just the way I like it! There was no snow overnight, as was predicted, and it looked like it was going to be a perfect finish to a really good ride. (SPOILER ALERT: It was!)
The 395 winds its way north-south somewhere between the I-15 and I-5. It follows the edge of the mountain range, though I didn’t see the elevation that I did yesterday.
Not unlike Highway 50, this portion of US Route 395 is high desert with lots of the same mountains, scrub brush and nothingness.
I passed right through Big Pine and Lone Pine. All sorts of pines, actually.
Fun fact: Lone Pine is noted as an access for both the highest point in the contiguous US (Mount Whitney) and the lowest point in North America (). Mount Whitney and the mountains surrounding are visible from the 395.

I kept seeing signs for , 100 miles to the east. Not today, thank you very much.

On I rode past , then through the sad little town of . That place should be listed as a ghost town.

After riding 178 miles, I stopped at 395/58 crossroad (named “Kramer Junction”) and gassed up; it was the last time I would need fuel today. Yes, my bladder is the same size as my gas tank...
In no time flat I had reached San Berdoo and was on the I-215 (that feeds into the I-15). We’ve discussed THAT highway, so you know it’s nothing but a high-speed contest where-as the residents of LA try to get back to their homes as quickly and dangerously as possible. There are some seriously bad drivers out that way!
From Kramer Junction to S it was 176 miles of hot asphalt. Nothing spectacular to speak of. For some reason, I was listening to instrumental tunes on my MP3 player today. Here are a few for your enjoyment:

My Triumph performed flawlessly. The big girl was smooth and comfortable and just perfect for this little road trip. Today's mileage was 356 miles, for a total of about 1450 miles overall. Not bad for a little 3-day ride.


To wrap up this ride report on Highway 50: The Loneliest Road in , I’ll say that it’s a fine road for those who enjoy the high desert and old west. There aren’t a lot of entertaining sights but there are a whole lot of friendly people.
While Highway 50 stretches all across the , I highly recommend the portion that crosses .
I did it late in the year…maybe November is too late. But I enjoy cool weather riding. Much more than hot weather! I'd guess that July or August would be hot.

Dress appropriately, see the sights and make sure your bike (and YOU) are in good shape. Because there ain’t nobody gonna go get you if something happens to either of you in the middle of nowhere.