New Mexico BDR with Dan Diego and the Drunk Uncle

I just finished the New Mexico Backcountry Discovery Route on my Gen 1 KLR. The ride itself was 1,200 miles over 6 days.  I ended up doing closer to 2.900 miles: Albuquerque to The start in Dell City, TX. The ride through NM to Antonito, Colorado.  Then the ride back to San Diego.

The KLR did great...truly, it was one of the best bikes for a BDR. Only dropped it off-trail while in Cloudcroft for a beer run. No major damage.

You’ll notice that I started with a riding partner and completed the ride alone...which is par for the course for me and BDR rides.

I recommend the BDR rides, though this wasn’t my favorite. 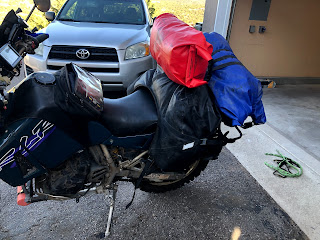 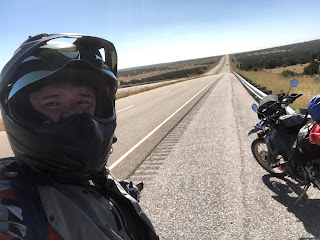 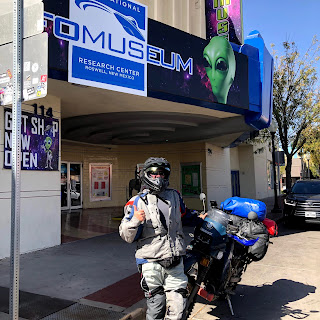 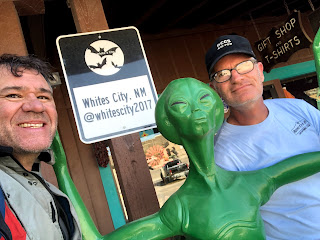 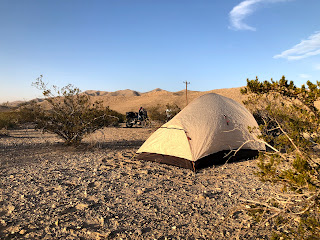 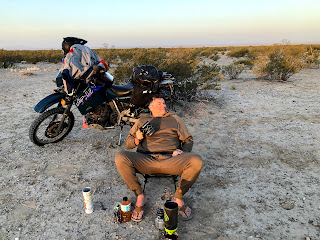 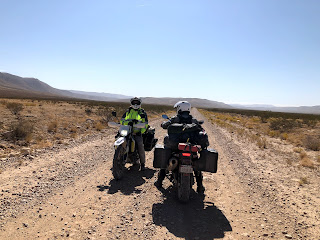 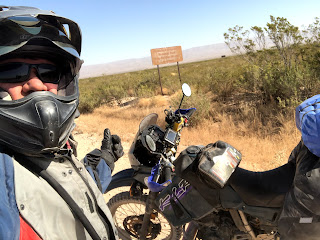 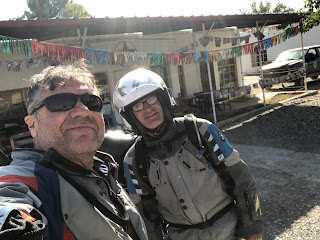 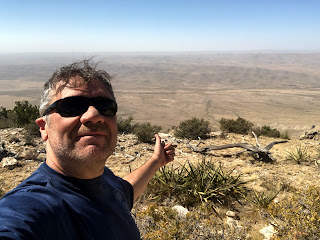 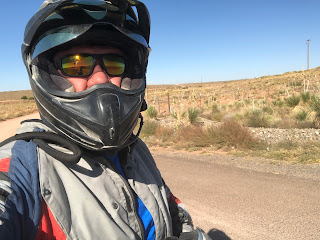 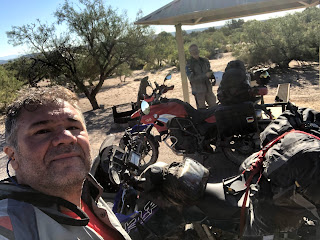 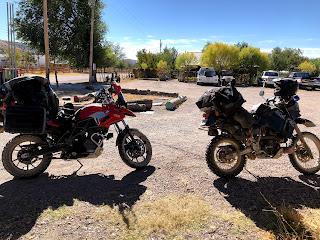 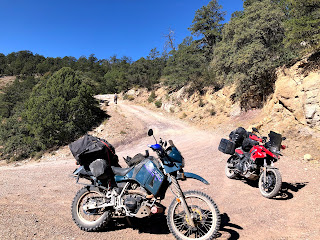 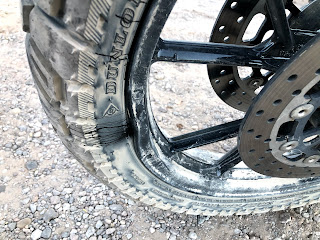 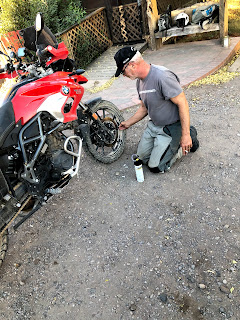 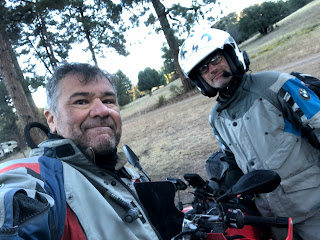 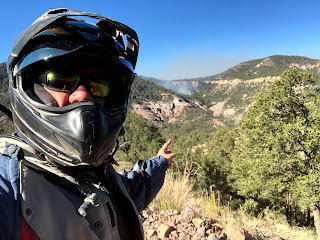 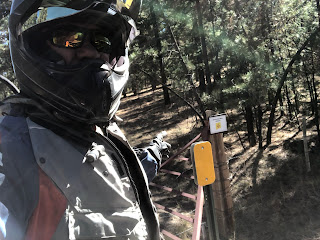 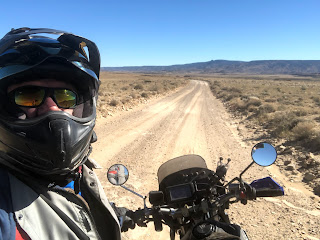 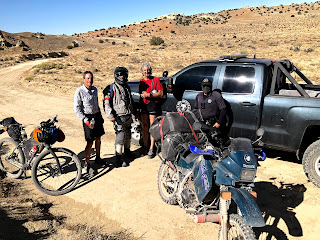 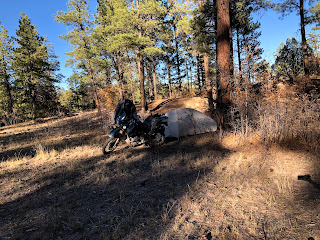 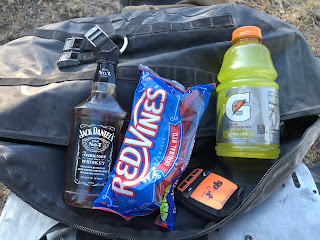 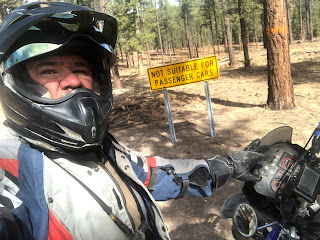 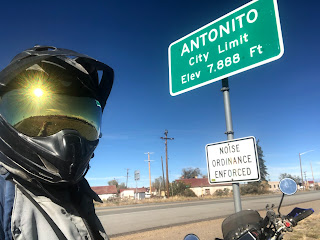 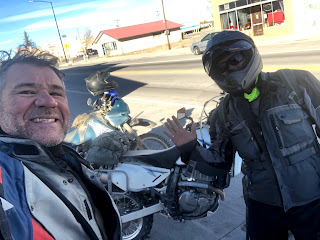 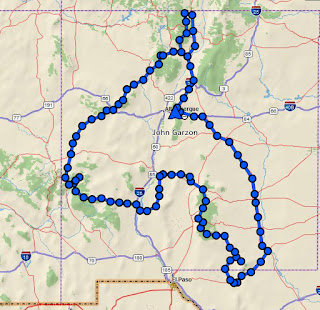 Notes: All pavement. Met Drink Uncle at White City. Proceeded to Pine Cyn campground  in the Guadalupe Natl Forest. Full so we pirate camped off the highway 30 miles before Dell City.

Day 1: Dell City to Cloudcroft. Most of Section 1)

Day 2: Cloudcroft to Ruidoso/Ruidoso to TorC

We made TorC just before dark yesterday. We’re up and around and having coffee and oatmeal. Not a really cold night.  Coyotes howled close by.

Some quasi-technical portions (rock) through the mountains on yesterday’s section. 50+ miles on dirt/gravel/sand ranch road (Buckhorn Ranch). Found camping just before dark in Elephant Butte state park.  Only 165 miles to Reserve today and it’ll be at elevation. Maybe we’ll stop at the AZ border or Luna.

Take an overloaded and underpowered KLR. Add a rider with dubious riding abilities. Oh, and for fun, make sure the bike is suffering from fuel or air issues. Then put that mess on some challenging hill climbs. Yeah, it was like that.

Question: Are those Indian rock paintings legit? Very pretty but they look too good.

We’re done for today. Section 3 in the books. Rolled into the village of reserve on reserve.

DU busted his tire and this may be the end for him. I’m deciding whether or not to continue solo. Eating some good Mexican chow at Ella’s first.

We haven’t eaten at one restaurant in NM that serve alcohol!

So, the KLR started sputtering...like it was out of fuel...on the worst possible sections of CC. I made that first one fine but stalled in the middle of the next two. Had to restart it and keep it in 1st and rev it past 6k RPM to keep moving forward.

When I got to the top I checked the air filter (fine) and blew out the fuel filter (looked OK). I thought it was water or crud in the carb but DU said it was likely the elevation. Unsure but I made it out OK.

Made me think of Robert Pirsig adjusting his carb in Colorado.

Some of you might be thinking, “You know, it might be nice to do a BDR with Dan Diego— maybe the Idaho, Colorado, Oregon... something like that. Well, think again, amigo because sadly this is the second BDR where I’ve started with a partner and finished solo. It was during the AZBDR that my partner was life flighted out so I ended up doing that one alone.

I ended up in Grants after polishing off sections 4&5.  It’s very, very pretty landscape. And that section coming into Grants through the Cibola forest, I think, was just really something through the pine forest; it didn’t even look like a trail over the pine needles. They were doing a controlled burn in the Apache forest section and had all sorts of forest people up there.

I dipped into Arizona on the way...just a little side ride.  I did 225 miles from Reserve.  Missed the Pine Hill market and that gas opportunity. I still had a gallon or so.

So the bike is doing good and I’m doing good and I’m ready to do sections 6 & 7 in the next couple days.  I’ll happily take advice if any of you guys have ridden those sections.  I’d be happy to hear anything I should be looking for.

I’ll let Drunk Uncle tell you what happened to his wheel and how he taco’d that front rim. He made it to Ruidoso filling up the tire every 30 miles.  Good attitude, that one.

Every day’s ride is better than the one before.  Seems impossible but it’s true.  Today’s ride from Grants to Cuba was fantastic.  The entire thing was just perfect.  Didn’t want it to end.

I know Section 6 is described as desolate—and I do like desolate places—but I ran into two bicyclists and some State wildlife guys right in the middle.  And I’ve been chasing año her rider—it looks like he’s a day ahead of me.

About the sand: I really didn’t see much deep stuff at all, and that usually in the arroyos. Most of the sand I encountered was on the last 1/3 of that section and was only in patches...and most of that on BLM 1102.

I would turn around and ride that section again!

Rode 50 miles out of Cuba toward Antonito and found a nice hidden spot to camp in the Santa Fe Nat’l Forest at 7,800’. Boy, it’s pretty up here.

Settling in with a dinner of Red Vines and Jack.  Gonna have to polish it all off as this is bear country.

This was the coldest night yet and I did fine.  I have a decent bag and insert and tent but yeah it was still pretty brisk. Was up early to jet boil some coffee and oatmeal and got on the trail within about an hour.

A note on gear:

Bike: I bought this 1996 Kawasaki KLR650 from the owner of top gun motorcycles and outfitted it to go to Ushuaia this year. the boat I was supposed to take from Panama to Colombia, the Stahlratte, is still not transporting passengers because of the COVID-19. and some of the borders are still closed in central South America anyhow. so the bike is actually pretty well set up. even so, this BDR has taken it’s toll on it! it is really shaken  some things loose. KLR’s rattle around anyhow but this one really got some screws lost. but that’s what I wanted to test out so that’s a good thing.  otherwise, it performed well.  This BDR requires good tires and a skid plate.

Camping: I have a Big Agnes tent and a Recon 5 bag. I bought a fleece insert and it likely increased the temp rating by 5-10 degrees.  I bring along a JetBoil Sumo as I need to start my day with coffee.  Two comfort items that I almost always bring are my Helinox camp chair and thermarest collapsible pillow.  Embarrassed to say they’re worth the extra weight.  Lastly, my sleeping pads usually let me down, literally, and this time was no different. The Klymit Static ran out of air at about midnight every time I used it.  May start carrying a self-inflating pad.

Pack: I use the Giant Loop Great Basin bag and it’s great.  Holds a lot of stuff...but not quite enough! I also started with two dry bags but the Chinese one fell apart and I replaced it with a too-big, silly duffel bag I found at Big 5.  Looks terrible, works fine. Lesson (not likely) learned on buying cheap Chinese stuff on eBay.

Nav: I use a trusty Garmin Zumo 660 for all routing.  Have for years.  I own two (I use this this off road) and have been very happy with them over the years.  I also have a Kyocera burner phone with all BDR tracks and other mapping on it...just in case.  I also share tracking with a SPOT 3 and a DeLorme inReach.

Riding gear: I use a Icon Variant helmet with an old Cardo-Scala intercom system for music, nav and phone calls.  I’m using the BMW Ralleye pants and jacket and they’re great.  My AlpineStars Tech 3 boots have been handy in the rocky terrain.  As you saw, I am relegated to using one pair of gloves as my warm pair was for a guy with two left hands! I swear by military gear so I have a PolyPro long underwear set and the Gore-Tex rain gear; haven’t needed the latter, have definitely used the former.

Other: I have an external power source that charges off the bike during the day and powers my phone, GoPro and inReach at night.  The GoPros have been actions up. The batteries just die too quickly.  Will have to look at that later.  (Baby) Glock 26.

Tools: Tubes, air compressor and just enough to change flats and do minor carb and electrical work.  Nothing too heavy.

I hope this helps someone.

I rolled into Antonito and wrapped up the NMBDR just about 15 minutes after another rider. Levi—not an Inmate, but he browses ADV Rider—was on a DR650 and also started with a partner and finished solo.

We had lunch at the Dutch Mill restaurant and compared ride notes. He had a couple get-offs and likely broke a rib.

Will complete my portion of the RR, but I’m taking a quick break. Good times.

So after finishing the ride to Cuba—probably the portion I enjoyed most— I ate at the Cuban Café and I figured I’d get a head start on the final section— section 7 —on my way to Antonito. I rode 50 miles into the hills and found a camp spot and it was just a beautiful, beautiful ride —probably some of the prettiest I’d yet seen on the ride so I kind of expected the rest of the ride— the final 150 miles— to be more of the same.

Well, the next day when I took off to finish that 150 miles it was a complete rock forest— almost the entire‘s last section... at least 100 miles of it... was just hard, hard rock.  Now, there were some pretty parts of that country but for the most part I was focusing on not destroying my bike.  Truly, all I did was focus on riding and looking at the rocks ahead of me. There was one portion right after the sign that said, “not suitable for passenger cars” that I thought I had accidentally gotten onto the alternate expert rock route.  I was later told that was not the case but at the time I thought I must be on it. It was some pretty tough and challenging stuff. Everything on the KLR that could rattle, did rattle!

I rolled in Antonito and I’m happy to be finished with the ride but I must say that the last hundred miles was definitely not my favorite part of the NMBDR.

I linked up with another rider who’d also just finished it and he stated that the folks who put the NMBDR together likely wanted to end the ride in a most challenging way.  And in that they succeeded.

Final thoughts: This was an interesting dualsport ride through some prime NM backcountry. I saw many different aspects of the state and that part I really enjoyed.  The map and GPS tracks were spot-on and truly helped when I came up to multiple trails going in different directions.  It seemed to me that instead of a south to north ride, the NMBDR was really a series of cool loops that were connected by dirt or paved roads.  So a rider could potentially ride a lot of south, west and east on the same section.  I would remind riders contemplating this ride to research their options well in advance and choose to skip some portions of the ride that didn’t appeal to them.  October seemed to be the perfect time to ride the NMBDR. It was warm in some places and brisk in most others—especially at elevation.  And one of the best parts is that it was dry the entire time.

Thanks for following along and being patient with my perspective.  I’d be happy to answer any questions that potential riders might have.