I attended the Christian Motorcyclists Association's WESTERN NATIONAL RALLY in Moses Lake, Washington from July 19 to 23 (see www.cmausa.org for more info on this great organization).

Lodging and area information is available at www.Moses-Lake.com.

Run for the Son Recognition & Awards – Celebrate the work that God is doing through your efforts!

Speakers from The JESUS Film Project, Open Doors, and Missionary Ventures International will share the impact of Run for the Son around the world.

Seminars on Wednesday, Thursday, and Friday.

I didn't travel with the CMA group from San Diego to Washington, but rode solo to stop and visit friends and family along the way. The group left Saturday; I left EARLY Saturday to avoid Carmageddon in LA (see www.latimes.com/news/local/carmageddon and www.carmageddon.com).

It's 985 miles from La Mesa to Madras, OR, where I'll meet up with Abe and the CMA folks. That's a really long day, so I plan to stop in San Francisco the first day,

and Redmond, OR on Sunday.

And I guess I'm taking the BMW... you know, since my Triumph is still in the care of my local dealer...

Departed San Diego at 4:30AM, attempting to get past LA--and the possible highway gridlock--by 0630. Piece of cake! Stopped for some tamales in LA and didn't see any traffic at all. Was through LA and en route to my friend Chris' place by 7AM.

What can I say about the I-5 that hasn't been said many times and by smarter people with much better grammar? It moves fairly quickly, there is always some type of construction and there are gas stations every mile or so. I was in Redwood City by 2:15 PM and relaxing with Chris. 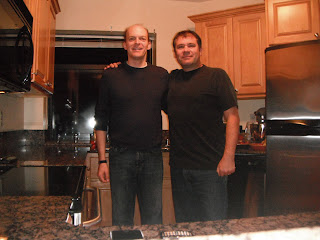 Tacos for lunch and Peruvian for dinner (A+ on both counts).

Skipped breakfast to get on the road. Left Chris' place at 8:30 AM, crossing the Bay Bridge by 9AM. The ride was beautiful (Mt. Shasta and the lakes!) but uneventful (except for a $5 toll leaving Frisco) until I reached Weed, at the I-5/Highway 97 cutoff. Weed appears to be an aptly-named town. Nuff said. The 97 is a fantastic route, with trees everywhere and lots of deer (didn't see any live ones, though). The blinking sign warning of "ROAD CONSTRUCTION: EXPECT MAJOT DELAYS) just didn't happen as it was Sunday and no one works on Sunday. Truth be told, in this economy, not many are even working during the week...

I made quick work of the 97 and pulled into my cousin Deb's place in Redmond. She and her hubby Don and great folks and I always have a good time with them. Stayed up a bit late talking about our crazy families.

Kind of an easy day. Not too much to do except wait for the rest of the CMA group to arrive; I expected them about 3PM.

Breakfast at a little restaurant in Redmond, then a tour of the town, to include the Deschutes River, where Don fishes. It's just 5 minutes from their place an a sweet little spot.

Headed to WalMart (sorry, Deb) and Home Depot for some extra bungee cords, then to Madras to wait for the group. Spent an hour at the McDonald's (where I'm typing now on their wi-fi) talking to another dual sport rider from ADV Rider (Hey, Tom!). Lots of fun.

Met up with the rest of the group at the hotel and headed to dinner at the Mazatlan Mexican restaurant. We will gorge ourselves on chalupas and discuss tomorrow's riding strategy. There appear to be about 16 other riders, so this should be interesting...

The group snapped a photo 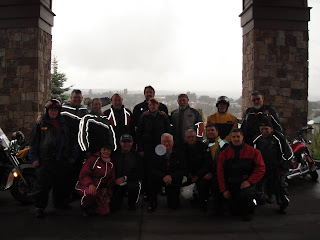 and headed off up the 97. Or so we thought. A minor mistake put us on a westerly vs. nothern route. We caught the error about 15 miles later and turned the caravan of 16 bikes back around. By 9AM we were back on the 97 and headed north. The route was beautiful and would have been nice...if not for the rain and very, very severe winds. Wow, I'd ridden through windy areas (granted, on heavier and lower bikes), but WOW. We were tossed about for what seemed like 1/2 of the ride. I could tell during the brief stops that the mood of most of the riders was somber. It appears that most of these folks had not ridden long distances, in the rain, in windy conditions. An it turned jovial fellows into some grumpy riders but quick. We ended up in Moses Lake 6+ hours later, after only 4 rest/gas/lunch stops. Not too bad at all, considering...

Everyone checked into hotles (some were camping), dropped their gear, and headed to the fairgrounds for registration and the welcome seminar. I browsed the vendors and sat with over 500 CMA'ers at te 7PM introduction. By 9PM we were leaving and by 11PM I was snoring.

Here we are: The happy SoCal CMA folks. 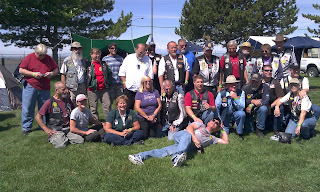 Day 6: A ride to the Grand Coulee Dam

Started off the day with a ride to the GCD, about 70 miles north of Moses Lake. The GCD is the largest in the USA. Just a beautiful site, especially with the water pumping out of it right now. According to the locals, they couldn't stop it if they wanted to as the snow pack (400+ feet this year) has swollen the rivers and lake and has necessitated the release of a few gallons of extra water. 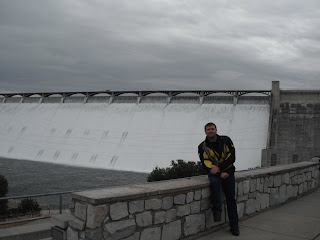 I rode up with a group of 6 other bikes, but continued on my own after speaking to a couple local riders. I hustled up to Nespelem and hopped on State Route 21, a small, mountainous road that twists up and around some pretty country. The summit's elevation was 3,315, and it led me to the Keller Ferry. I rode right on to the almost-departing ferry and was across the lake in 10 minutes.

I headed to Ephrata to climb a local hill (nice little off-pavement ride!) where I had a view of the city (Ephrata), 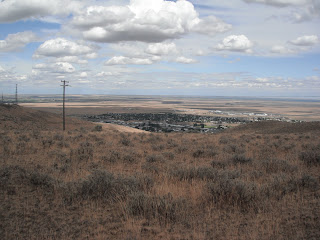 the Cascades, and Moses Lake. I'm told there are 60-mile view from that hilltop, but it seemed more like 65.

A quick jaunt brought me back to Moses Lake where I filled up. 226 miles on 5.10 gallons. Not too shabby.

After the final evening of the rally, I prepped the bike and planned to head on out.

I was up at 5:30 AM and on the road by 6:15 after a quick hotel breakfast. The day looked good, I was feeling great amd the bike was running well. My goal was to reach Redwood City, CA, about 960 miles away. The back-up plan was a stay at my cousin's cabin in Shasta, CA, about 525 mile away. Let's see how it goes...

To arrive quickly to the I-5, I decided to take Highway 84 west to Portland instead of going straight down Highway 97. Bad call. Although I saw the Columbia River for a 100+ miles, it was extremely windy and added about 2 hours to my already long ride. Doh! The bike rolled along, although the seat wasn't as comfortble as I would've liked. I tried to ride 200 miles between rest/gas fill-ups to maximize the mileage and minimize the stops. While I did make the best time, my butt was never sorer. I passed Mt. Shasta at 6:00 PM and decided to keep moving as my final destination was only 4 more hours south. I saw a lot of this... Wind, wind and more wind. Maybe it's the higher and lighter BMW that causes so much movement, but the wind blew me from one side of the road to the next. I've ridden in all elements--rain, fog, sand storms, hail, thunder and lightening--but wind has gotta be my least favorite. 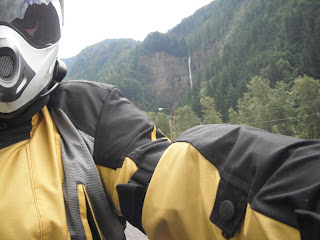 I rolled into the Bay Area at about 9:30 PM and was greeted with--you guessed it--more wind. Wow.

I ended up arriving at my friend's place by 10:45, tired and sore. A good night's rest made me forget the long ride.

Day 8: Rode over to my 2nd Cousin Julia's place in Palo Alto--only about 8 miles away. She and Tony have a beautiful boy named Eli. That smile will get him far in life. 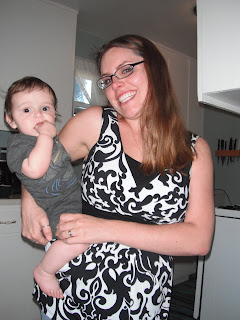 While we were catching up (I hadn't seen Julia since she graduated high school), my cousin Dee Ann and her husband Alan and their daughter Calista arrived. We hadn't seen each other for quite a while (St. Louis in 2001?) so more catching up was in order. We all headed to Celia's Restaurant for some tasty Mexican food...and more catching up. Here we are: 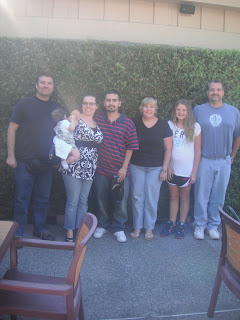 Calista was competing in the Acro Nationals in San Jose, so I headed down there to watch the opening ceremonies. Some really incredible stuff--think "Cirque du Soleil" only a younger crowd. Calista showed me a "gut buster" that I won't be trying anytime soon. Here we are at the convention center: 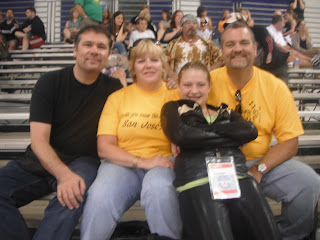 I was back at Chris' place by 10 to enjoy a nightcap and contemplate tomorrow's ride.

After a nice local breakfast with Chris, I headed south at about noon. A fairly uneventful 8-hour ride brought me mainly down the I-5. There was a bit of traffic near Magic Mountain and a couple of accidents, but that's what lane splitting is for, right? I rolled into my driveway at 8:15PM, with a sore butt (vs. an iron one) and a big ol' load of smelly clothes. Ah, home...

All gear performed well. The winner this time would have to be the BMW Air Mesh pants. They were great in all types of weather--not too hot or too cold. Not completely waterproof, but they resisted the little rain I encountered.

Once again, my Sidi Canyon Goretex boots and Garmin Zumo 660 GPS were truly indispensible and made the ride that much easier. The AFX Dual Sport helmet was "just OK." It performed about as well as I thought it would, but I sure missed the functionality of a modular helmet.

My Belstaff jacket proved to be waterproof and comfortable throughout the ride. I removed the liner to let more air in, but some of the hot days had me sweating.
Posted by Dan Diego at 2:42 PM No comments:

Ah, Alaska, you call to me like a mentally unstable lover...

What's next for me? If you're reading this, I haven't yet killed my Triumph Rocket III. Yet. Regardless, I have a BMW R1150GS and she's BEGGING to go for a little ride.

Hmmm, how about San Diego to Inuvik, Northwest Territories, Canada, to Prudhoe Bay/Deadhorse, Alaska and back to sunny SoCal? Yup, that sounds great.

Lemme see...MapQuest says such a ride would be less than 9,000 miles. I could do that in, oh, 2 1/2 weeks. (See a pattern here?) That'll be 3,600 miles to Inuvik via the infamous Stewart-Cassiar, Alaska and Dempster highways and 1,400 miles to Deadhorse (via Fairbanks and Coldfoot) on the Klondike and Top of the World Highways, as well as the Haul Road. Yahoo! Then it's quick hop back home (under 4,000 miles). Piece of cake! 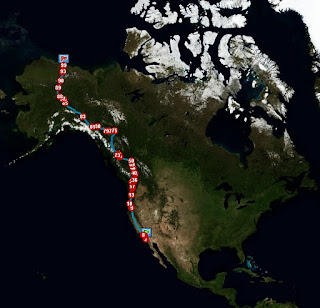 So, when will this lil' bike ride take place? I'll shoot for 2012 (if the world doesn't end in May, as my Mayan friends claim) or 2013 to accomodate a friend who absolutely wants to ride this with me. We shall see.