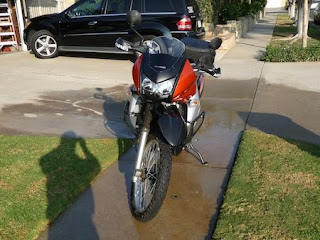 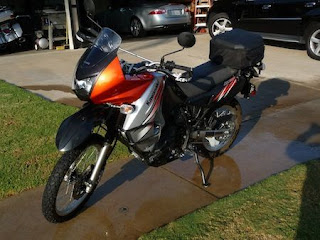 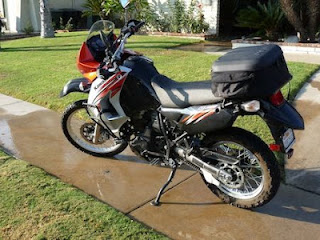 I've been looking to get another dual sport bike since my BMW R1150GS deserted me.

After researching several bikes in the DS class, I ended up wanting a KLR.

Now, where to get one? I scoured all of the usual sites: Craigslist, eBay, CycleTrader, etc.

I found a couple that looked interesting and settled on a newer one, a 2011 KLR650 in Silver/Orange with only 680 miles on the odometer...barely broken in!

I paid for it, went by AAA to register it and enjoyed a nice ride home on the I-15. The bike sounds like a VW but rolls down the asphalt well.  Now to get her out in the sand...

On a related note, it appears I'll be liquidating some guitars as mama says if another toy comes in, something is going out.  Good-bye Les Paul and Telecaster!

Should stranded adventurers pay for their own rescues?

Many of us go “off the grid” often enough that we buy GPS tracking devices or Personal Locating Beacons (PLBs) to let family, friends and potential rescuers know where we are.  I own and use a Spot GPS tracker.

Some of us purchase insurance specifically tailored for adventuring souls who may require air extraction or emergency services and want to avoids the very costly bills of such misadventures.

However, some folks think that the rescuees should foot more of the bill…it was, after all, the adventurer who put themselves into the predicament to begin with.

Well, whether it’s over land or sea, desert or mountains, the question is asked: Should stranded adventurers pay for their own rescues?  Here's a recent article that sheds some light on the issue.

Should stranded adventurers pay for own rescue?

Some states are considering billing victims for back-country rescues. But one group warns that the policy may discourage people from getting help.

The blogosphere is afire with praise for an in-depth and amazing multimedia report by the New York Times about the world-class skiers who were caught up in a deadly avalanche last winter in Washington state.

The report focuses on the perils facing skiers who go into the unmonitored back country. It also coincides with news that several states -- including those where skiing, hiking and other outdoor recreation are big business -- are considering legislation to bill victims of back-country mishaps for some rescue operations.

Lawmakers in Wyoming are considering a bill that would let local law enforcement charge for search-and-rescue (SAR) missions in cases where they believe the victims put themselves into harm’s way.

The legislation came after an incident last winter: a $14,000 operation to rescue three snowmobilers trapped in a mountain pass. When state officials asked the snowmobilers to help pay for some of the costs of their rescue, the three hired an attorney -- who questioned if the state had the authority to ask for such a payment.

In response, the proposed measure would let rescue payments "be left up to the discretion of the sheriff (involved)," Wyoming representative Keith Gingery, the bill’s sponsor, told the Jackson Hole News and Guide. "They'll say which ones are victims or whether someone may have contributed to the situation."

If the measure is passed, Wyoming would join a growing list of states and counties that allow some sort of fee for search-and-rescue operations.

"If you’re getting rescued, there should be an expectation you’re going to participate in the cost of that rescue," New Hampshire senate Republican leader Jeb Bradley said in an interview with the Associated Press.

Lawmakers are hoping these fees will not only help fund local SAR operations, but encourage adventurers to be more cautious in back country areas.

Colorado has a "Corsair" card that residents and visitors can purchase for $3 a year or $12 for five years. Colorado.gov says that by purchasing the card, "you are contributing to the (state’s) Search and Rescue Fund, which will reimburse these teams for costs incurred in your search and rescue.” But it also warns the card is not insurance, nor does it pay for medical transport.

Grand County, Utah, meanwhile, lists a sliding scale of fees on its website for SAR operations -- with collectable costs anywhere from $250 for a small incident, classified as taking less than three hours with six or fewer responders, to $750 dollars for a "large incident" requiring more than three hours with seven or more responders. Those fees do not include extras like helicopter rental, fuel costs and any damage to equipment.
But the idea of billing the victims of outdoor adventures also has its opponents.

In an online position statement, the National Association for Search and Rescue worries that some victims in life-threatening situations may put money concerns over safety and decline to contact potential rescuers.

"A perceived or actual belief that the subject of a SAR mission will be billed for the lifesaving actions undertaken on their behalf must not delay or interfere with a timely call for help," the statement notes.

"Delays can place SAR personnel in extreme danger and unnecessarily compound and extend the length of the SAR mission," the statement adds. "Because of these factors, and to eliminate the fear of being unable to pay for having one’s life saved, SAR services should be rendered to persons in danger or distress without subsequent cost recovery from the person(s) assisted unless prior arrangements have been made."

Here are some comments:

"People should absolutely be bearing the cost of their rescues from the back country.  Taxpayers should not be on the hook to pay for other people to risk their lives having a good time.  Once you decide to explore off marked trails, you should expect to own the risk associated with your adventures.  I like the idea of some sort of insurance program to cover the SAR costs - then you can share the risk with your fellow adventurers.  Note that I say this as an avid hiker myself."

"Insurance was invented to address risk - life, health, property, etc.,  If an individual decides they wish to engage in activities that have inherent risks then they need to protect themselves, their family and their assets should a risk associated with the activity be realized.  Hence, require individuals to have insurance and if they don't they will get billed for services just like if they did not have health insurance and they required medical attention.  YES - they should be prepared to pay for such services."

So, what are your thoughts on the matter?