I rode the big Triumph into work today. It was raining cats and dogs this morning; has been since last night.

I thought of Randy and Dave -- a couple of riding buddies -- as I rode in, splitting lanes between the stop-and- go traffic.

I was wearing a pair of Columbia rain pants that Dave gave me a long time ago. They still keep me dry in the heaviest rain.

But that's not why I'm thinking of those guys or writing this today. What those two really gave me was the ability to ride confidently in less than ideal weather conditions.

Boy, do I remember that first long ride! Rain, snow, hail, wind, sand...we saw it all.

Anyhow, these days I don't "tolerate" bad weather, I actually enjoy it.  And that is the true gift those guys gave me.

I was a fairly new street rider and the two guys who invited me on that 8-day ride back in the summer of 2000 were experienced motorcyclists.  I learned so much from that ride and enjoyed it immensely.

Dave would say, "I'm a rider, not a collector."  And Randy was never in a hurry, never too concerned about weather.

"We don't have a lot of vacation time," he would say. "We gotta ride when we can ride, weather be damned."

Big thanks, fellas. I miss riding with you very much. 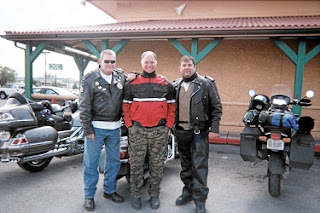 It's Farkle Time: What I've done to my KLR

I wanted to document a list of additions, accessories and modifications I've done to my 2011 KLR 650 since I bought it in December 2012.  Here we go...

The bike came with some items already installed:
I promptly purchased a few more items...
And lots more to come (but don't tell the wife...)

Spot GPS link: http://spotwalla.com/tripViewer.php?id=5d6850ea449153b4b&showInfo=yes
I was looking at my new KLR yesterday.  A mere 870 miles on the odometer and WAY too clean.  Hmmm, how to put some miles on it and get it un-clean? Looking at the local ride maps, I had several options for a half-day, 150-mile ride.  I thought the Nate Harrison Grade loop would fit the bill nicely.  If THAT route doesn’t shake some parts loose, nothing will.

The Nate Harrison Grade is about 50 miles north from my place.

Who is/was Nate Harrison you ask? Well, take a look at this link to learn more about this very cool ex-slave who lived in these parts a while back: NHinfoLink  An important character in history to be sure.
I departed with a full tank, a warm jacket and high expectations for a good ride.  It was in the mid-50’s, so it was a bit brisk.

I rode 50 miles of asphalt up the I-15 to the 76 East.  About 13 miles in, I took a left into some orange groves on my way up the Nate Harrison Grade.

The pavement ended about a mile in and I was left negotiating crumbling old asphalt, hard-packed dirt and light gravel; really, not too bad of a road at all. 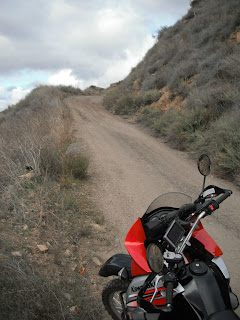 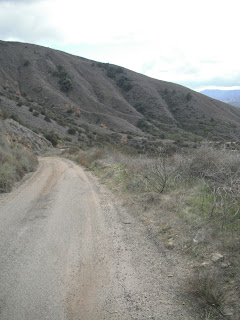 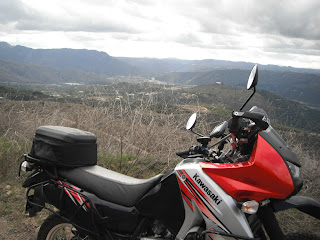 I stayed mainly in 2nd and 3rd gear due to the tight twists and switchback turns.  The road gained altitude pretty quickly and in no time I was at 2,500 feet elevation – and it was dropping into the 40’s.  Nice views of the valley below. 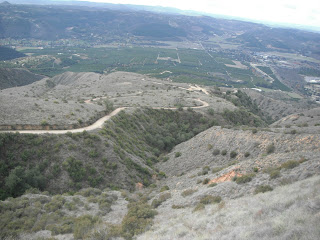 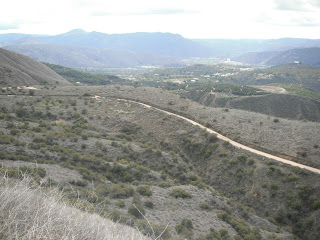 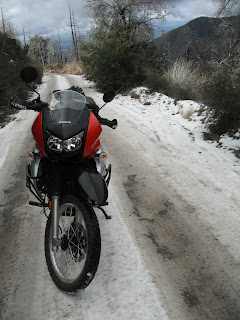 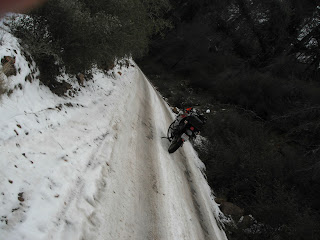 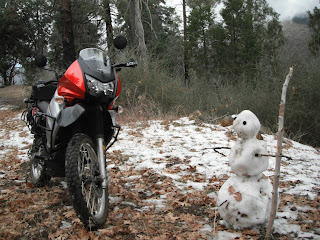 The road gave up any sense of rideability and quickly became muddy, then slushy, then icy, then snow-covered.

As the family watched me motor by, a little girl asked, “What are you doing, mister?” When I gasped that I was riding my motorcycle, she responded that maybe I should buy a snowmobile.  Ah, from the mouths of babes…
I was too determined/hard-headed to turn back.  Plus, I’d rather fall up than down.  Anyhow, it was probably only another mile or two until I reached the top and real pavement.  So on I went, slipping and sliding the entire way.  Didn’t drop it, though, and that’s one of the big differences between this 400 pound KLR and my 700 pound pig of a GS.  I was able to remain upright though some lucky and very goofy-looking legwork.


A family tubing on the snowy slopes at 5,100’ just stared at me like I was a Martian.  The guy just shook his head and said, “Yo, brah, I dunno…”  And I didn’t either.  But I wasn’t turning back and riding DOWN HILL in that.  No way. 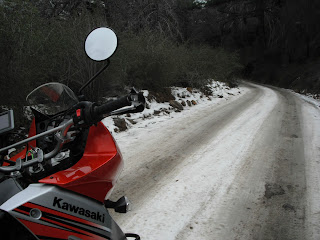 Luckily, I reached the top of the road—and pavement—in less than a mile, at about the 5,200’ level.  I stopped to take a breather at the forest service house, then off I went toward Julian.  I didn’t realize the road was so icy so I sang a chorus of whoa, whoa WHOA! when I hit a slick patch at 45 MPH.  How I kept from dropping the bike is anyone’s guess. 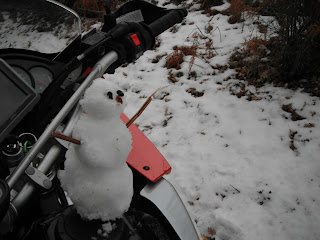 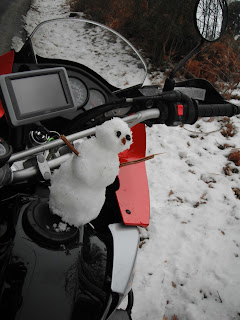 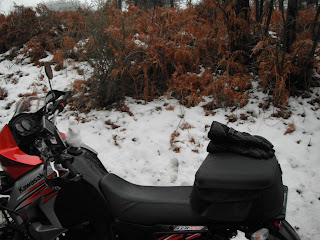 
All things considered, I wouldn’t recommend the Nate Harrison Grade in these conditions.  Only a real knucklehead would be on that road on a day like this.  (I know, I know—I hear the sounds of DS types revving their motors and heading there now.)


I reached Mother’s Kitchen at the top of where several families were stopping to drink cocoa and play in the snow.  I chose the and down I went toward the 76.

At the 76 I turned left to see if the Hideout was open.  I could have used a burger and a brew at the cool little biker bar.  It was closed, so I took .

Again, it was still chilly, so not many motorcyclists would be out and I saw no other vehicles. 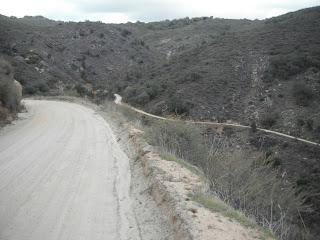 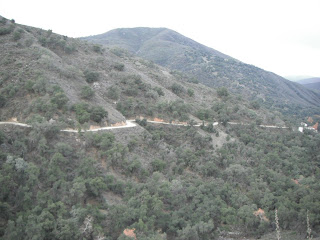 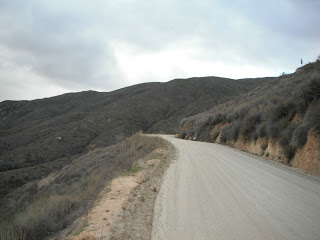 I had the road to myself so I pushed it as much as I dared.  The road was damp and muddy in some places but in overall good condition.  I passed two other dual sport riders on big ol’ BMWs going the other way but no cars.  I stayed on that road for more than 15 miles until it dumped me on to just east of Ramona.


From there it was a fast haul on the 67 back to .  In 25 short miles I was back home and warming up, my still-new KLR hit the 1,000-mile mark just as I pulled into my driveway.  The killer KLR performed flawlessly and I managed to stay upright. 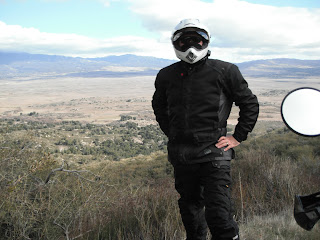