UPDATE: I made it back from Oakland (510 miles to San Diego) in 8 hours. Encountered some rain, wind, lightning and the infamous Hell A traffic. Piece of cake.

The bike rides beautifully and I really think I'm gonna like this one. Hey, maybe I'll keep it for more than 3 months this time!

Now, to get it in some dirt!

Does this sound familiar?

Here's a quick update on the continuing saga of my quest to find and buy "the Perfect Dual Sport bike" if there is such a thing...

As you may know, I bought a 2004 KTM 950 ADV a couple months ago. Almost right away, I realized that the bike just wasn't for me. Among other things, it had too many miles (30k) and I preferred a newer bike with EFI vs carbs.

So I put two bikes up for sale -- my trusty KLR and the KTM -- to finance another bike: a newer KTM 990 Adventure; they both sold right away.

After having no luck finding a 990 for sale (Craigslist, ADV Rider and eBay), I went proactive and put up some want ads. That got me some decent offers but none were really close.

I missed out on a really good one locally. It was a beaut but had too many miles for what they were asking. So my options were narrowed to a 2007 in Seattle or a 2010 in Oakland. I made the seller in OakTown an offeron his loaded 990 and will pick it this Saturday (a fun fly and ride deal).

In the meantime, a friend met me in Carlsbad this past weekend and let me ride his 990 ADV. Wow, that's quite a bike! We talked bikes over coffee and then I took the big girl for a spin down PCH. If I was on the fence about that bike at all, that ride put any qualms to rest. It is a super nice bike and makes my weeklong wait to get my own that much worse!

I fly to Oakland Saturday morning and should be back in San Diego that evening after a 500 mile ride down the coast that is supposed to be a little wet (the weatherman is calling for heavy rains!). Great way to break in a new-to-me bike...

Here are some photos to compare the two bikes (outgoing gray 950 and new orange 990): 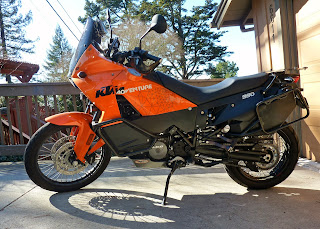 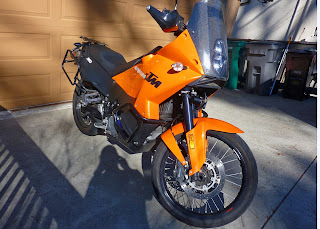 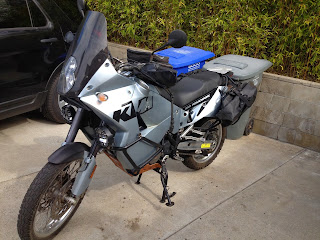 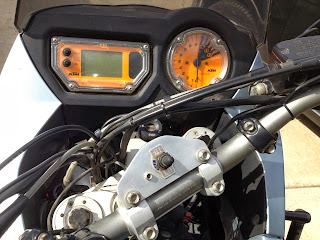 Will update everyone when I have the new girl home.
Posted by Dan Diego at 5:21 PM 4 comments:

The reasons are varied and probably don’t make sense, but I had 3 bikes in my garage and couldn’t justify keeping all 3 if I wasn’t riding them all enough.

I put all 3 up for sale and sold the first two to get offers: My KLR and KTM 950 ADV went fast. Am looking at another bike soon, but will keep my Triumph for now.

I was asked by a friend why the KLR had to go. It was really about a recent Baja ride I did. Off pavement was fine, it was riding 4 full days of 75-85 MPH that convinced me that I need a long distance dual sport bike that holds up for lots of miles on a day-after-day basis. Many of you know that I’m an Iron Butt guy and put a lot of miles on my bikes so if I buy another Dual Sport, it’ll have to be something that is great off road and good enough on long distance asphalt.

Sure, I’ll miss my KLR. It was bulletproof and dang near perfect for the riding I do. But what I’ll miss the most is the camaraderie of the other KLRistas. The guys I rode with in Arizona, San Diego trails and Baja. And the fine folks I met at Eagle Mike’s tech days. There just isn’t another bike community like the KLR riders I met and rode with.

So I guess this is good-bye, KLR-wise.

Here is the tentative route from San Diego to Inuvik, NT, Canada, and back I plan to ride this July.

And if I have the ganas* when I reach the northernmost drivable city in Canada, I may go ahead and ride up to Deadhorse/Prudhoe Bay, Alaska, to see the Arctic from the US, too.

Here are a couple of Ride Reports that have helped me plan for this ride:

The Lure of the Dempster: http://www.advrider.com/forums/showthread.php?t=906146

And, yes…before you ask, this is one of those Bucket List things… I say it's never too late to have a happy childhood.

As Mark Twain put it: Twenty years from now, you will be more disappointed with the things you didn't do than by the ones you did do. So throw off the bowlines. Sail away from the safe harbor. Catch the trade winds in your sails. Explore. Dream. Discover.