San Diego to Michigan for free beer: The Ride Report

(I've subtitled this Ride Report: OCD and the Art of Motorbike MPG.)

Bombing across the desert before dawn is a wonderful feeling. The wind and the rising sun are at our backs as we’re wrapping up a 12-day road trip.

We’re at the end of Route 66 and are just a few hours from home. The bikes are running well—not a glitch during the entire ride—and we’re feeling great even after 5,000 miles of riding.

So here’s how it went down…

My buddy Chuck and I departed San Diego before 6am on Friday, July 31st… and early morning starts would be a theme throughout the ride.

We were up and on the road before the sun was up, almost always. I would maintain a slower speed and closely scan the road for debris until it was light out. Then we would pour it on, staying within the “spirit” of the posted speed limit.

Our first day’s ride, to Mesquite, Nevada, was probably our hottest. Though barely 400 miles, it was a scorcher. Checking out of the hotel the next morning, I left my air compressor and helmet Bluetooth device in the room. I was to go without music or audible GPS instructions the rest of the ride. And that kinda sucked.

The next day’s ride to Denver was to be our longest, in a couple ways. Mileage-wise, it was only to be 700 easy highway miles. However, 60 miles from our destination, we came upon an accident (motorcycle fatality) that completely blocked the I-70 eastbound for at least 6 hours. It was a hot and miserable time waiting in the small town of Idaho Springs, Colorado. We arrived to a friend’s hours before 11pm and he had cold beers and a full bar waiting; that made a tough day so much better! The next day we got a little later start, enjoying breakfast and a walk around his property. The tour included many deer, some classic cars and a stable full of motorcycles. Well worth the extra time.

Shooting for a 500-mile ride to Omaha, we only made it to Lexington, Nebraska; a short 350-mile day. However, we made up for it the next day on a nice 625-mile ride to La Crosse, Wisconsin.

Waking early the next day, we rode 200 quick miles to Milwaukee only to find that we couldn’t board the ferry across Lake Michigan due to the returning Sturgis bike traffic. Our next option, the port town of Manitowoc, was only 100 miles away and they could get us on that ferry, so off we went.

The S.S. Badger is one of the last coal-burning ferries still operating and it was a true pleasure to be aboard. Classic in every way, the 4-hour ride was pleasant as we relaxed, chatted with other bikers and enjoyed the scenery.

We landed at Ludington, Michigan, at 7pm and decided to stay the night (instead of dodging deer in the dark). We checked into the Stearns Motor Hotel—a place that turned out to be our favorite lodging of the ride.

The next day’s ride to Lachine was nice and easy…barely 200 miles. And that brought me to Pappy’s Pub and the aforementioned “free beer.”

We stayed 2 days with our friend and fellow Blue Knight, Chuck. A retired Detroit police officer, he was the consummate host, leading us on a ride along Lake Huron, up to Michigan’s UP and across the Mackinac Bridge…something I’d wanted to do for years.

We stayed with Chuck and his former DPD partner Brenda for two nights. What a great time!


We departed Michigan with a goal of riding as much of Route 66 as possible. Now, if you’re familiar with the song, I can confirm that we definitely got our kicks along the way, visiting all of the places mentioned in that tune.

Passing through Route 66’s official starting point of Chicago, we hustled all the way to St. Louis, Missouri; a 600-mile ride that brought us to a fine hotel at the base of the famous Arch where I spent time with my cousin who lives there.

Leaving St. Louie early the next morning, we headed toward Oklahoma City. It was oh, so pretty, but we continued another 85 miles to Clinton, OK. We weren’t able to visit the Route 66 Museum there, but we did stay in America’s Worst Hotel Room; scabies are NOT the preferred Route 66 souvenir…

We left before it was light on Sunday, August 9th, for Albuquerque, New Mexico. The 450-mile ride was one of the quickest and easiest and we arrived before 1pm. We spent the day relaxing with my brother and his wife’s family. Lots of fun; a very much-needed break from riding.

We left Albuquerque before dawn. The morning was cool and clear…but that was to change. Standing at the corner in Winslow, Arizona, we could feel the heat coming.

By the time we reached Seligman, AZ, it was 109F, officially “hot as balls” as southern folks are prone to say. After eating at Lilo’s West Side Café, we rode classic Route 66 through Peach Springs and Hackberry, stopping at the famous general store there.

Due to the intense heat, we didn’t stop in Kingman, Arizona, as planned, but rode on through to Needles, California, skipping a scheduled stop to see the ghost town of Oatman and its mules. As we approached Needles on the I-40 West, I couldn't help but sing that Three Dog Night tune, “Never Been to Spain” to myself.

Well, I've never been to England, but I kinda like the Beatles
Well, I headed for Las Vegas, only made it out to Needles

And so we did.

It was so nice to get out of the heat. Chuck and I just cranked up the AC and laid there in our shorts.

We were up early on August 11th, ready to ride the final leg of the trip home. It was a little over 300 miles to San Diego and we hit it just right, missing all of the heat and rush hour traffic. We arrived home before 11am, safe and happy after a fun, easy ride.

Trip facts:
• My bike’s odometer read 5,580 miles; my GPS reflected 5,441 miles (the latter likely being more accurate).
• Though we rode through some wind and heat and a little construction traffic, we encountered only light rain on a couple of occasions.
• We passed through 16 states: California, Arizona, Nevada, Utah, Colorado, Nebraska, Iowa, Minnesota, Wisconsin, Michigan, Illinois, Indiana, Missouri, Oklahoma, Texas, New Mexico.
• We spent less than $11 on road tolls—mostly in Oklahoma—and $115 for the ferry (passenger and bike).
• As far as trip packing went, we traveled pretty light but didn’t lack anything along the way. I spent $390 for fuel, paying under $3 a gallon for premium—and often closer to $2.50—the entire time.
• Lodging costs were only $243 each, staying four nights with friends and family.

I’d say that made for a very reasonably-priced road trip.

So, what’s next? I’m planning the Next Big One now. Eastern Canada’s Newfoundland and Labrador sounds mighty interesting… 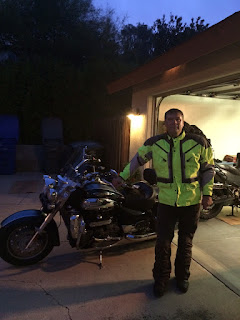 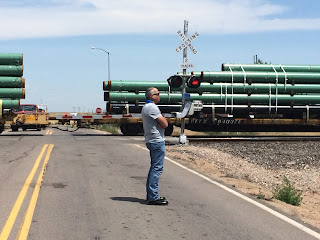 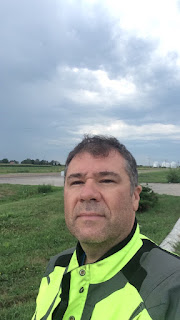 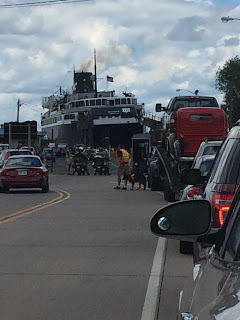 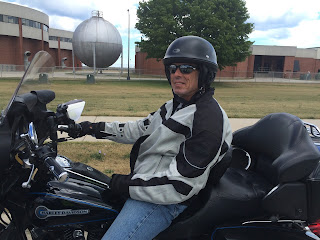 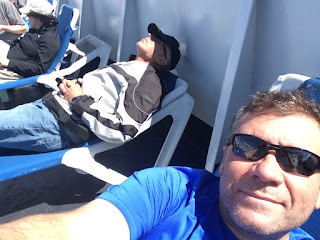 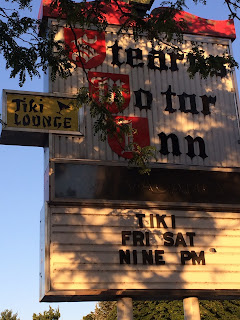 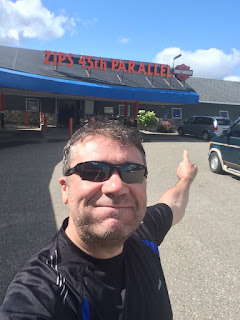 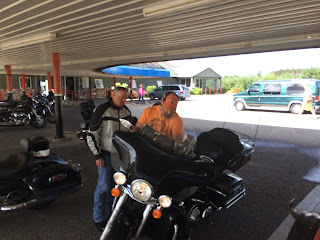 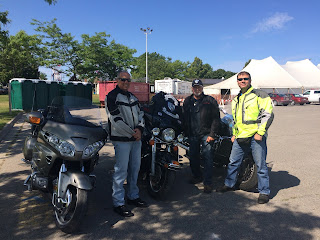 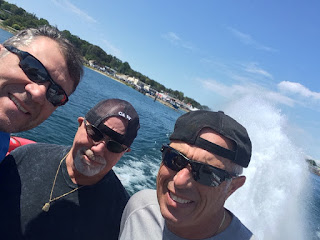 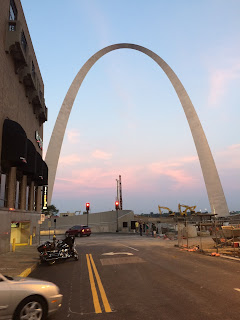 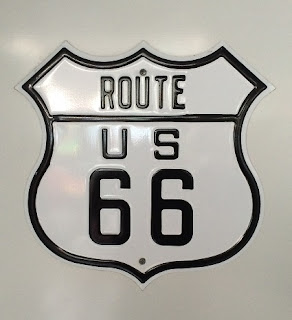 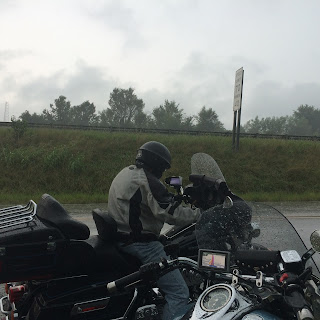 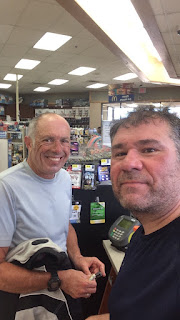 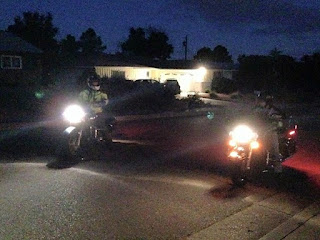 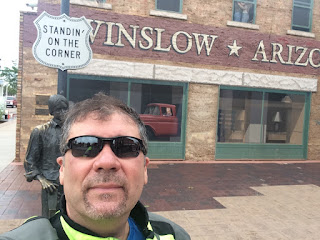 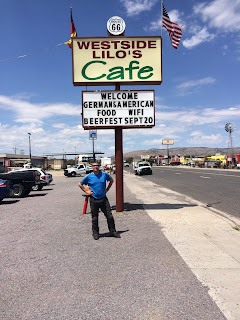 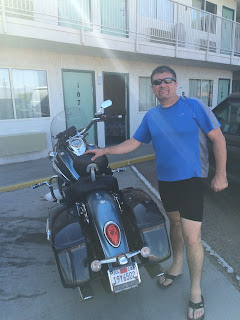 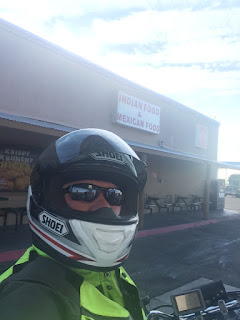 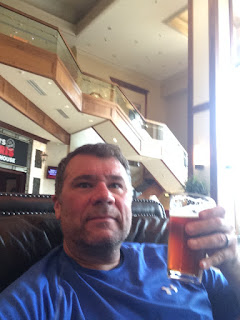 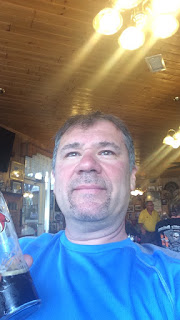 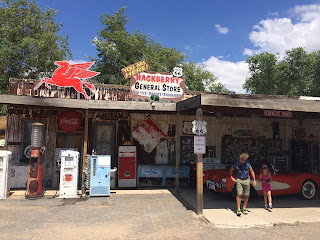