The desert is strange and beautiful. But if you’re reading this ride report, I don’t have to tell you that. 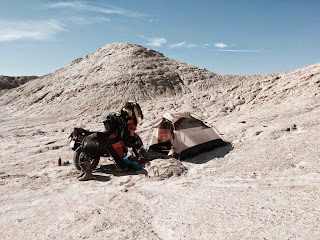 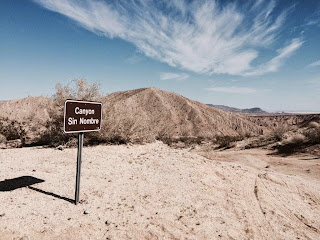 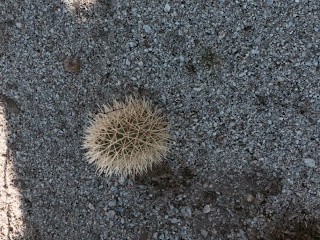 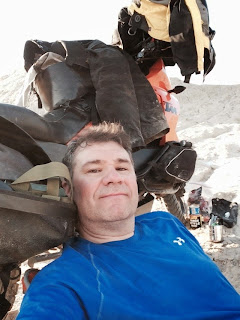 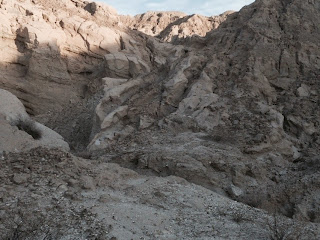 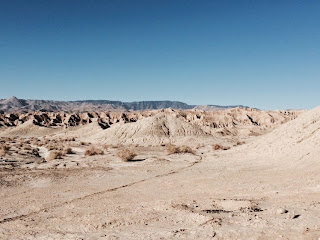 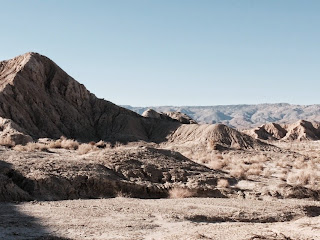 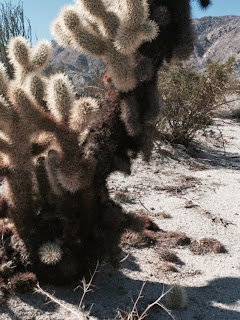 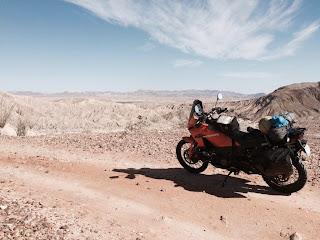 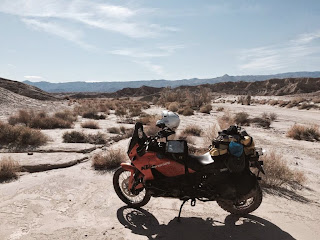 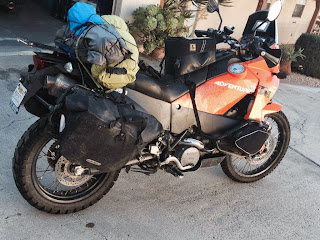 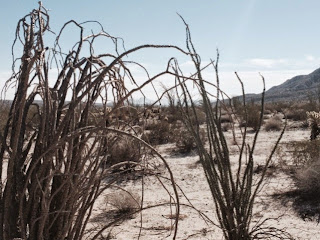 Winter temperatures are pleasant, so I thought I’d explore some trails I’d seen off Highway S-2, a 50-mile route that cuts through the Anza-Borrego Desert State Park between highways I-8 and 78, east of San Diego.

On the morning of Valentine’s Day, I packed up my trusty KTM 990 with the minimum camping gear and headed 80 miles away for the desert.

It was a mild 74 degrees when I left San Diego, and was in the brisk mid 60’s on the I-8 summits heading over the mountains.

I turned north at Ocotillo and headed into the desert on the S-2 intent on finding a camping spot before dark. The S2 is known by a couple of names (Imperial Highway, e.g.), but I like, "The Great Southern Overland Stage Route of 1849" the best.

Of the numerous trails to the east and west of the S2, I specifically wanted to explore Canyon Sin Nombre.

The canyon wended through a twisty route of fairly accessible jeep trails. The terrain consisted of rocks, hard pack and sand. I enjoyed seeing the desert plants, low hills and tall sandstone canyons as I made my way deeper into the desert.


As I rode along, I named the vegetation in Spanish, as I’d learned them first in that language while traveling throughout Baja when I was young: Ocotillo, barrel cactus (bisnaga), chuparosa, jumping cactus (cholla), agave, yucca; all beautiful. I could see that the autumn rains had done quite a job on the soil, sculpting the sandstone into gothic spires and erasing vehicle tracks from previous years.


I passed through the Border Patrol checkpoint where three lonely agents scoured suspicious vehicles for aliens, drugs and other contraband. A few miles later I turned off into the trail and smiled to see signs warning of, “soft sand ahead." I didn't air down my tires, waiting instead for the really deep stuff.

I passed one couple car camping along the route about a mile from the S-2; other than that, I saw no one. At about 5 miles in, I saw a sign that barred further entry; a mile past that I found a soupy mess under some type of renovation. I followed the tractor trails for as long as I could, but 800 pounds of bike and gear are no match for wet muck. I turned south toward the hills and made my way back to the main trail.

Note: I may have laid my bike on its side a few times.(Few: More than two, less than seven. Few.)

Moving north again, I passed some great looking trails. There are some neat Indian rock paintings and caves out there, but I wanted to find a nice, secluded camping spot first. I turned right and east I went off on Palm Spring trail (spoiler alert: I found neither at the promised 1.6 mile mark).Passing some campers at Hollywood and Vine (no kidding), I turned northeast onto the Vallecito Trail.


About 3 miles in, I spied a group of small hills in the distance and fought my way through some deep sand to arrive at a perfect camping spot. Turning off my bike, I enjoyed complete silence…not even a cricket was chirping. I sat in the shade of my bike for a moment and just soaked it in, enjoying the slight breeze. This is what I’d come for.

OK, time to put up the tent. I’d just added a Big Agnes Burn Ridge Outfitter 2-person tent to my collection. It was smaller and lighter than my other shelters and perfect for this type of camping. I knew I wouldn’t need the rainfly as I wanted to see the stars tonight.


I stripped down to shorts and sandals and walked up into the canyons. The rains must’ve been quite severe to carve out such valleys. I found pieces of pottery exposed in the sand—almost an entire pot in one area, ancient color still showing on the sides.


The temperature, never reaching past the mid 80’s, soon began to drop as the sun began descending slowly behind the hills. By the time I’d made my way back, my campsite was engulfed in shadows. Only 5pm and I could feel the brisk air coming on the breeze.
I opened a can of beans and added some Ortega chilies. I cooked them up and ate them as I looked over the valley below. Still not a sound.

I realized I’d seen no wildlife but for some loud ravens; no snakes, lizards, coyotes or varmints.


I scribbled out two crossword puzzles before it was too dark to see. Sipping whisky from a flask, I watched as the last remnant of light disappeared below the mountains. I could hear a grumbling jeep somewhere on the road below, its lights coming into view then disappearing as it made its way deeper into the desert.


I laid back and looked up at the sky, Orion the hunter moving slowly across the dark night. Owls hooting nearby broke the complete silence and I drifted off to sleep. I would wake occasionally to see a different arrangement of stars.

It felt like the mid-50’s at 9pm but was in the 40’s when I awoke at dawn. I remained wrapped in my bag until the sun was up, then crawled out for coffee. I thought as I sat there that my stove’s fuel container has lasted me the better of two years, to include a 35-day Alaska/Canada ride and at least 3 Baja rides. Incredible.


After a breakfast of an apple, nuts and a protein bar, I packed up camp and headed back to the main road. I’d gone through a gallon of water and had only a liter remaining; not enough to explore more trails today. I found the S-2 and continued north to the 78, passing Butterfield Ranch and even more trails to explore later.

I arrived back to San Diego by 3pm dusty, hungry and happy.

Man, I sure love the desert in winter.