I rode out with Dan — a friend and fellow SDAR (San Diego Adventure Riders) member — to Joshua Tree on Friday afternoon for some motorcycle camping. This was just a quick shakedown ride to test our equipment before our planned ride to Inuvik this July. 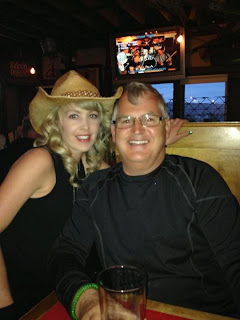 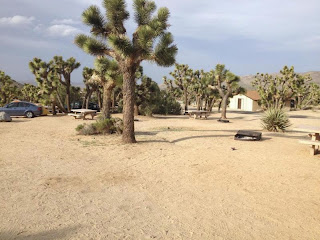 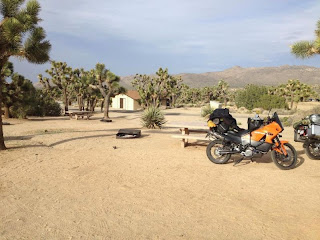 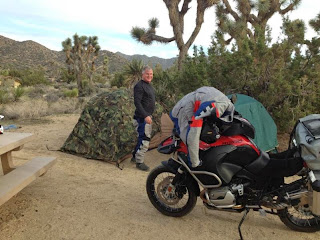 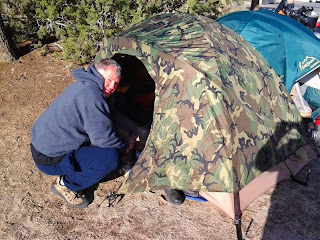 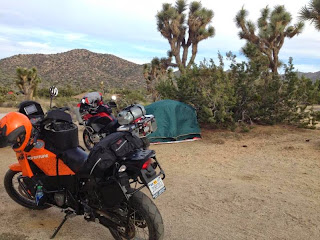 As you might've heard, there was some wind and rain. The wind was howling and pushed us all over the road on the way there. Lotsa fun!

We arrived to JT by 5pm and were informed that all camping sites were full. The ranger at the entrance told us, that due to the strong winds, we wouldn't want to tent camp there, anyhow. Pffft! What does he know!

We turned around and headed back to town where we found the Black Rock campground LINK (http://www.nps.gov/jotr/planyourvisit/blackrock.htm). Dan checked with the ranger who gave us the very last campsite. Score! We set up our tents—using a strand of trees for a windbreak—and headed into town for some grub.

We found a cool little bar and grill — the Joshua Tree Saloon (http://www.thejoshuatreesaloon.com/) LINK — and had ourselves some burgers and brew. Since karaoke night was in full swing, we hopped onstage and did a fine rendition of “I Will Survive.” (OK, maybe that last part wasn't exactly accurate…)

We headed back to camp, where—On the way back into the park— I dropped the bike in some sand I hadn't noticed. Doh! No biggie as the IPAs I'd enjoyed soothed the pain.

We finished up a flask of bourbon as we admired the desert surroundings and hit the sack by 9:30 or so. The wind was persistent but the tents seemed fine. That was about to change...

Throughout the night, we experienced some hellacious wind and rain on top of that. There were strong gusts and some sustained winds that threatened to send our campsite to Arizona. The tents held up just fine...they moved around a little but stayed put.

We were up by 7:30am and on the road by 10 after some camp-brewed coffee.
On the way out of the park, Dan motioned over to the hills we'd admired the day before; they were now dusted with snow above the 6k’ level...a beautiful site for sure.

We stopped in for some fantastic biscuits and gravy at a roadside diner (John’s Place in Yucca Valley). It was a good foundation for fighting the STRONG side and head winds we encountered until we made it south of the I-10. The side winds were of the variety that threatened to lift the front wheel off the ground…the fun kind of wind...

We decided to skip the mountain route over Anza due to the snowfall. Dan knew a fun route that took us to the I-15 via Winchester Road. We were in Escondido by 2 and I was in La Mesa shortly after.

It was definitely an excellent opportunity to try out the gear we plan to use in Canada/Alaska this summer. (NOTE: It’s clear we still have some tweaking to do…)