I plan to do a few Baja rides on my KLR this summer. Nothing too crazy, just exploring an area south of Ensenada that I've always really enjoyed. My first ride was in an area I’m familiar with but hadn’t ridden in quite a while. So off I went this weekend.

I left San Diego early on Saturday morning. My plan was to ride from Tecate to Ensenada via Highway 3 and the Ruta de Vino (the Wine Route), then down to Santo Tomas via Highway 1. Sure, that’s all slab, but you should know that Mexican highways are like the US' country roads. From Santo Tomas I took a featureless hard-pack road by the side of a little store that led into the hills. 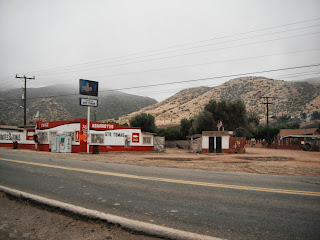 I had no GPS tracks or waypoints. Actually, nothing more than a vague idea of where to turn to locate the small farming/fishing village of Erendira, “somewhere on the coast at the end of the road.” OK, I can do that.

The road passed many small ranches and was not technical at all…just a mix of gravel, sand and dirt. I met only 4 vehicles along the road, all heading in the direction I was leaving. At about the 22-mile mark I saw the coast; I actually smelled it first. 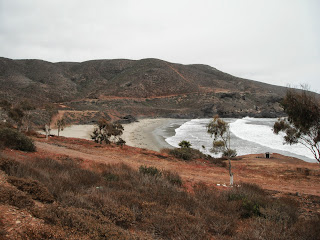 What a beautiful sight. Instead of heading south, I took the road north a bit to see San Juan de las Pulgas, a tiny community on the coast. I spoke with a few gentlemen about the weather and US politics then continued back the way I’d come.

Down the coast, behind newer fences, I saw what appeared to be a large compound and an observatory. 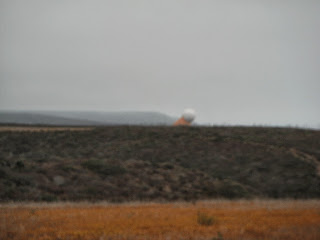 Hmmm, I’ll have to look into that.

NOTE: I spoke with a few locals who told me about a "Scandinavian cult" who had set up residence quite a while ago. See the February 2010 San Diego Reader article titled, “Mysterious Danish Group Builds Exotic Compound on Baja Coast.” Here’s the Google map link: http://bit.ly/L5hyR9

The next stop was La Calavera, a small fishing camp at the bottom of a steep, rocky mountain road. 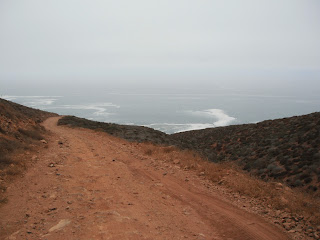 I had fun negotiating a 400 -pound bike down a road best suited for 4-wheel drive vehicles or goats. 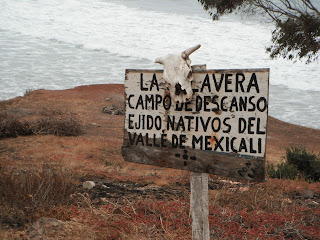 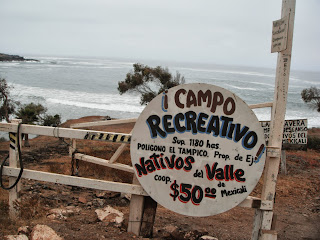 A few minutes later I passed through Rancho Tampico and was advised to look out for chupacabras. That guy’s front yard is the Pacific Ocean…I'll bet he sleeps well. I mean, except for all the chupacabras. 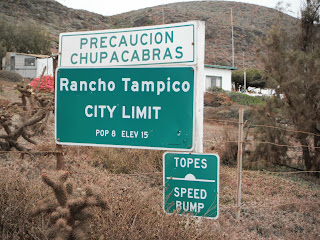 I enjoyed miles of unspoiled coastline as I rode along a fairly well maintained road. I passed through the small surfing town of Punta Cabras. Very tidy and colorful, like I’d expect from surfers.

On I rode to the north side of Erendira, passing by the infamous Coyote Cal’s and then on to Castro’s fishing village. I was dismayed to see Erendira’s main street has been paved. I suppose that’s progress, but there went 40 years of dirt road main street memories.

I passed through the town and turned toward the coast, riding across a sandy river bed. It’s dry now, but I’ve seen it full of rain water and flowing viciously to the sea. The last bad one was in 2010, and it was a whopper.

Soon enough I was up on a mesa and driving between fields of leek, artichoke and brussell sprouts.

The olive orchard isn’t looking so good, but there are still many trees that refuse to give in to the constant sea spray. I picked out a stretch of beach that no one appeared to be using and plopped down for a rest. 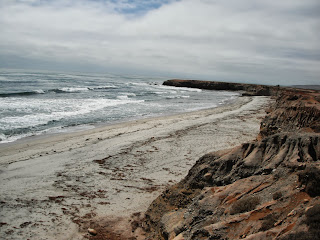 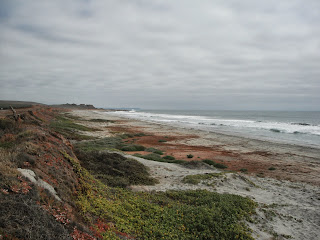 Whew! I’ll go into town later and pick up some supplies and eat some crab burritos at Gloria's.

I awoke early the next day and rode some of the beach area to the south. There is an old volcano that you can ride through. The tip of Colonet could be seen jutting out miles away. They’re building a big old port there now and many locals and Baja lovers are watching to see what changes come to this area.

I zig-zagged up into the mountains above the small community and soaked up the truly beautiful view. There is nothing like it anywhere, and hardly any of it is commercialized or built up.

I decided to take the highway back, so off I went down the 11-mile or so road that connects Erendira with Highway 1. Soon enough I was back in Santo Tomas and heading to Ensenada. I found it strange that the large checkpoint that the Army had constructed to search for northbound drugs and southbound weapons was vacant.

It was a brisk 67 degrees and misty most of the way. 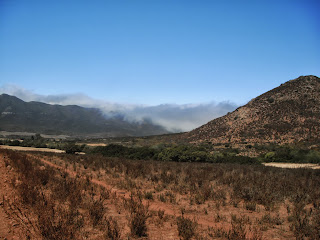 It felt good as I motored along, thinking about a cup of coffee and a breakfast burrito.

I stopped at Los Poblanos for tacos in Maneadero, and again at El Fenix in Ensenada. 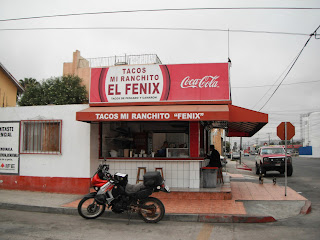 There was very little traffic on an early Sunday morning and I quickly made my way through the city.

An astute soldier checked my motorcycle at the first toll plaza, but his comrades seemed bored as they listlessly fingered their rifles. I smiled as he asked me what was in the tail bag.

We both laughed at that.

I stopped along the toll road a while later to look at the view from El Mirador (the lookout). It normally provides one of the best views in the area, but alas, the marine layer was still out and refused to allow a view.

A little while later I was in TJ where some creative drivers were putting my defensive driving skills to the test. I can confirm the KLR’s lack of a rear brake. A brush with a speeding sedan introduced my front tire to a guard rail and had my blood pumping for a moment. That’s TJ driving for ya…

The border wait wasn’t bad at all, but I bypassed the line, anyhow. Considerate drivers awaiting their turn to speak with immigration officers moved to the side so I could squeeze through the lines of cars to arrive at the front. No one seemed to mind except the very last car: our mirrors exchanged glances and his lost. His expletives faded as I moved forward and presented my passport to the grumpy border inspector.

“What are you bringing back from Mexico?”

“Nothing but memories of a good time, my friend.”

He smiled and waved me in.

Off I went to wash some of that Baja dust from my bike and my body.

I’m already planning the next one. Hmmm, they say that the ride from la Bocana to San Quintin is an interesting route…