Psycho Hillbilly Crackheads from Hell (Or, “How I Spent my Memorial Day Weekend")


It was to be an enjoyable weekend of motorcycle camping at a secluded spot—a shakedown ride for a summer ride to Canada and Alaska. It morphed into a drug-fueled soundtrack consisting of bluegrass, AC/DC, hip hop/rap, radio static, what sounded like painful sex acts and hillbillies yelling, “yeeeeee-haaaaawww!!!” All at maximum volume. I was subjected to this delightful scene between the hours of 11pm and 7am.

Ah, but let me start from the beginning…

My riding partner, Dan, recently suggested a second and final shakedown ride to make sure our camping gear was ready for the wilds of Canada. 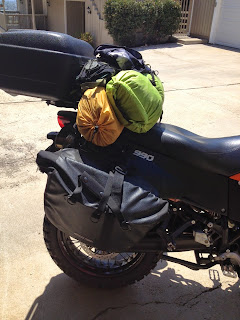 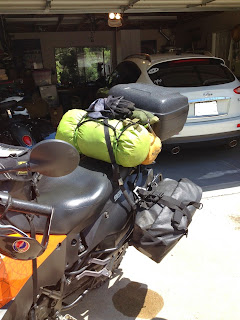 He knew just the spot, a hidden campground in the middle of the Cleveland National Forest., a place so far from civilization that he predicted no one would even be there but us. Perfect, I said. Let’s go.

We met at San Diego’s finest back-country biker bar, the Hideout Saloon in Santa Ysabel (http://www.thehideoutsaloon.com), on Sunday afternoon for a planning session and a couple warm-up brews. 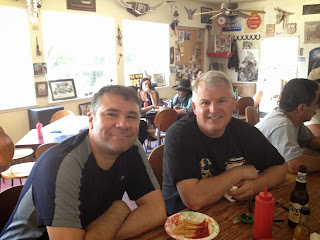 By 5pm we had reached the spot, tucked away in the hills and 7 miles down a little road.


Dan was correct as there was only one other car parked there, a young couple tent camping. We selected a spot away from them and set up our gear. 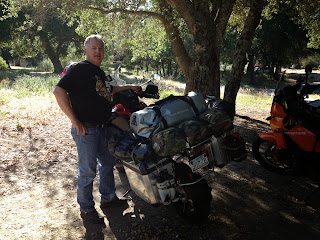 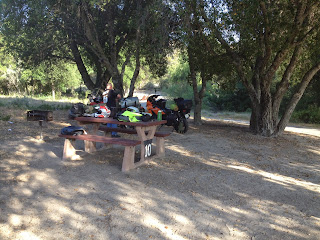 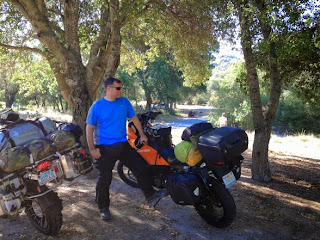 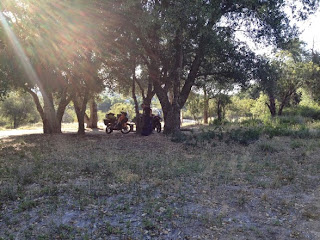 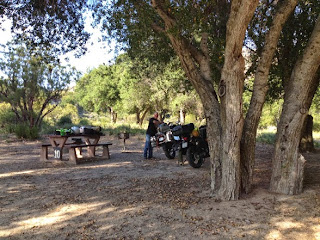 Everything appeared to be going well; the tents and cooking gear were in fine order. We started a campfire as the sun went down and sat back to enjoy a couple big San Diego Lost Abbey brews (http://lostabbey.com/). 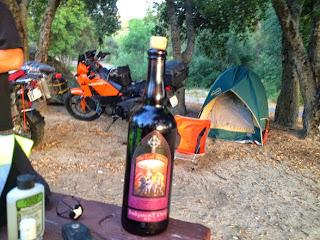 By 10pm we were both ready to turn in and try out our sleeping bags and air mattresses (yes, we are old and no longer enjoy sleeping on the hard ground).

It was almost exactly 11pm when I heard the first, “yeeeee-haaaaaww!!” The hillbilly holler was accompanied by the all too clichéd bluegrass banjo music (My Old Kentucky Home, no kidding.) My tent was lit up by a large truck’s headlights pointing right at my tent. I scrambled to grab the necessary hardware to confront the unwelcome guests and unzipped my tent at surprising speed for a tired old guy full of local beer.


As I jumped out of my tent, wearing naught but boxers and a Smith & Wesson, I faced a scene from Deliverance. Instead of squealing like a pig, I inquired “semi-nicely” as to their intent. The 3 men and a little lady looked intrigued as to who would spoil their good time. The big truck’s engine was revved for effect, of course. The bluegrass music was turned up even louder, of course. And off the truck screeched in a show of backcountry lunacy. Of course.


Holy cow. I just stood there and listened to them race through the campground, hooting and hollering. The only other sound was Dan’s impressive snoring coming from deep within his tent. You have gotta be kidding!

I went back inside my tent and listened as the group proceeded to whoop loudly, smoke crack, sing along with the radio – badly, may I add— and make all sorts of love to that poor girl. It would have been amusing, funny, even, if I hadn’t been so tired. I am amazed at how the other couple who were camping directly across from this redneck disaster tolerated the fiasco, but they did, apparently.


Dawn broke by 5am and I could take it no longer; I’d slept not one wink. I dressed, sat in my camp chair and made coffee as I listened to the catastrophe wind down. And it did, too, at 7am sharp. I guess their crack/meth wore off at the same time that Dan’s Ambien did, because all of a sudden the radio noise died and Dan stumbled sleepily from his tent.

“Did you hear music just now?” Said Dan as he rubbed his eyes.

I looked at him incredulously. It took all I had to now toss my hot coffee at him.

“Are you serious?” I sputtered? “You didn’t hear any of that?”

“In. Frickin. Credible. Just amazing.” That’s all I could say.

Dan warmed up some coffee as he listened to me recount the Hillbilly Massacre of 2014. He chuckled as I recalled the hooting and/or hollering I endured; the 2 hours of full-volume radio static; the high-fiving, love making, crack smoking lewdness that was now silently passed out in the dirt just 100 yards from our campsite.

Dan asked me why the redneck quartet acted as they did, especially in such a nice campground. I could only reply that the cretins’ neighbors would never allow such thoughtless merriment to occur in their trailer park. That was only a guess.

We packed up camp and left by 8:30. The only evidence of the madness I’d listened to for 8 solid hours was a lone hillbilly, leaning unsteadily on a truck and 3 lifeless bodies lying in the dirt alongside of him. I revved my bike’s motor for effect, but the group was too far out of it to even realize we were there. 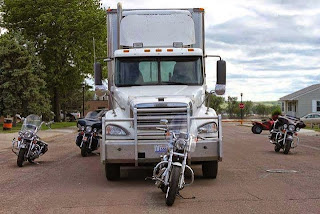 The driver of this big rig can't see ANY of the bikes in this photo.


Something to think about.
Posted by Dan Diego at 12:59 PM 3 comments:

So, these two yahoos show up at my brother's house two months ago en route to "Central or South America." They called me for advice on border crossing; we spoke for a while and I sent them, "How to cross every border between Canada and Chile."

They had a beat up van, some surfboards and, most importantly, the beautiful and indispensible naiveté of youth. And off they went.

I started corresponding with them via email but I only received one response: "We're somewhere south of Oaxaca and, man, we're having a friggin' blast!"

So this morning I received the following message and I thought you all would enjoy it. The video is priceless...

I hope this email finds everybody well. I want to update everybody as to how the trip down south is going. Right now we are in Tamarindo, Costa Rica. It's world class surfing out here and the water is 70 deg and clear. It's been two months since we've left Tucson and I've hardly sent anything to anybody, sorry about that. Internet has been pretty shoddy since we've crossed into Mexico but it's also because we both want to make the most out of this trip and step away from our 21st century duties, sort of disconnect a bit. We initially told everyone (really, a lot of people) about setting up a website (elyoda.com) where we would post videos, pictures, and updates for the trip. After two months, we posted one picture. I now feel that maintaining a website while on the road would detract from the experience of the trip, and as most of you all know I'm pretty tech-tarded so it's a lose lose. So, instead we will try to seek a balance of keeping you guys informed and not filing a lost persons report while I still preserve sanity with my Macbook. We will try to send out an email update every week or so, maybe a few sentences about progress (or regress), a dissertation about the meaning of life, or a report of my inner workings depending on what foods I'm ingesting that have or have not been properly prepared.


We brought a GoPro with us to give you guys a point-of-view perspective of the trip. Unfortunately, I left the charge/transfer cable on my mom's kitchen counter, so there is no footage of Baja or Northern Mexico. You didn't miss much anyway, we were mostly driving. We finally have a video up (still, there's a lot of driving) so let us know what you think. We will continue to kick out videos as we go along on the trip. They will be posted to my YouTube channel and not to the website. If you do want to get this 'so-called' weekly email as well, please reply so I can create a mailing list.


We miss being home and seeing everybody.