Ten cities with the worst traffic: For you LD Riders

No real surprises. I rode my motorcycle thru LA last week. Oy, I do not miss that traffic!

I'm fortunate that California allows lane splitting. (And you’ll notice that San Diego does not find itself on this list…)

Many long distance riders will find ways to bypass the chaos that the traffic in these cities pose...either by taking alternate routes or traveling through and around the heavy traffic areas during off-peak hours. 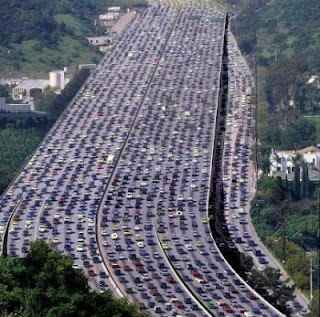 How do you manage to skirt the traffic? Any tips or tricks you care to share?

Ten cities with the worst traffic


These are the 10 cities with the worst traffic:

Average commute time: 28.6 minutes (15th highest)
After being replaced by Honolulu for a year, Los Angeles once again earned the title of the most congested metro area in the country. In 2012, on a Friday at 5:00 p.m., the average driver wasted more than 28 minutes in traffic. Four of the 10 most congested corridors last year were in the Los Angeles metropolitan area. The worst is an eight-mile stretch on Interstate 405. Los Angeles also had the second highest population density of any metro area in 2010, behind only New York, at 2,646 people per square mile. Only these two metro areas exceeded 2,000 people per square mile that year. However, in Los Angeles, commuters were far less likely to get to work via public transportation. In 2011, just 6.2% of area workers took public transit to work, versus 31.1% in the New York area.