Motorcycling is an inherently dangerous lifestyle. I hesitate to call it a sport or a pastime, as it truly is a way of life.

So it should come as a surprise to nobody that the act of getting on a speeding motorbike and going to far-off places comes with risk. James Agee said that the goal is the same: life itself; and the price is the same; life itself.

That said, I had a most excellent ride these past 10 days. There were injuries—some severe—and that just goes with said lifestyle.

So I read about the Arizona Backcountry Discovery Route (AZBDR: http://www.backcountrydiscoveryroutes.com/AZBDR) and took up the challenge: A friend and I would ride from San Diego to the Mexican border in Arizona, then ride 750 miles through Arizona back roads to the Utah border, camping along the way.

OK, all set. Ready for adventure. He’s on a big, shiny BMW GS800; I’m on an equally large and intimidating KTM 990 Adventure. With too little pre-planning we were off and riding on Friday, April 17, 2015, en route to Bisbee, AZ; because we dilly-dallied along the way, we arrived to Sierra Vista after dark. I could then see the ride was going to be touch-and-go.

We rolled up to the official start of the ride at the Coronado Monument near the Mexican border on Saturday morning. It was a beautiful day and the paved road quickly changed from gravel to dirt to a rutted trail. Ah, just what I expected.

I should mention that I was only fairly GPS-proficient. I’d used my trusty Garmin Zumo 660 GPS on-road for years, but had never dealt with off-road tracks. That issue proved to be a recurring theme throughout the ride; a true “learn as you go” experience.

So off we went. We predicted the 9 sections of the AZBDR would take us 4 to 5 days to complete. We wrapped up the sections comprising the Coronado National Monument to Sonoita — then Sonoita to Benson — on the first day. We took a slight detour as I tweaked the route but were back on track soon enough.

The second day consisted of Benson to Mammoth, staying in Winkelman for the night. We camped right on the edge of the Gila River and talked late into the night with some new friends—locals who had us laughing all evening.

The ride to Globe — then to Young shortly afterward — was challenging but scenic, with some incredibly rocky ground that resembled a lunar landscape. This would be the section mentioned as “likely damaging to motorcycles” and “recommended only to expert riders.” I didn’t read that until later…

We were really moving along. There is a series of rocky hills on the way to Young that is absolutely ludicrous; I highly recommend bypassing them. One of the high points of this ride was the Mogollon Rim. Just spectacular; some scenery not to be missed. We put the section between Young and Winona to bed and stayed at a KOA campground in Flagstaff for the night.

On day 4, we headed to Winona to begin section 7. The route to Cameron was eye-opening for several reasons and—for me—the most challenging portion of the ride: over 15 miles of volcanic sand.

At about 4pm, Dan and I were hustling through a hilly forested area, about 18 miles from Cameron, where we intended to stay for the evening. I was a couple hundred yards ahead of Dan, trying to simultaneously check the GPS tracks as I negotiated the rutted terrain. I suppose I was going about 30 MPH or so. In a moment I was on the ground, rolling away from my fallen bike. It appears that my front wheel was in one rut and my rear wheel in another. When the ruts took different directions, I went down hard. Surprisingly, I was uninjured and my KTM suffered only minimal damage to the left side. I put the bike upright and waited for Dan to arrive as I shook off the dirt nap. After he didn’t arrive in a few minutes, I turned around and found him lying under his bike…also in a heavily rutted area. He was in a lot of pain and stated that he’d broken some ribs. I contacted 911 and a helicopter arrived within 45 minutes. While we were carrying Dan to where the helo had landed—about a mile away—a Coconino sheriff’s deputy arrived in a 4x4 and carted him the rest of the way. It was all pretty efficient, actually.

Aristotle said that the ideal man bears the accidents of life with dignity and grace, making the best of circumstances. And so he did.

I hid his bike and gear in the brush as the copter flew Dan to Flagstaff; a friend with a trailer arrived later that night and towed it to his place in Prescott.

After considering my options, I decided to finish the ride. On the 5th day, I headed back to Cameron where I purchased the Navajo Nation backcountry permit for $12 and immediately hit the trail for Marble Canyon. I took an alternate route to the rim of the Grand Canyon, as seen from Navajo land. There was no one there but me and it was magnificent. No tourists, no structures except an old fire ring, no sounds except the wind lightly blowing through the scrub brush. I soaked in the solitude and realized how fortunate I was to be seeing it like that. Continuing on, I found a nice little site about 50 miles into the reservation just before dusk and set up camp.

The following day, April 23rd (my 6th day on the ride), I rode through Marble Canyon and, past the Vermillion Cliffs and down a long, silty road to the Utah border. In a way, it was a sudden, unceremonious end to an interesting ride. There I was, staring at the “leaving Arizona, entering Utah” sign and it just wasn’t sinking in. I slowly rode the last 15 miles or so to the pavement and found my way to Kanab for some Mexican food and cold ones. I once again “pirate camped” off the main road and pointed my KTM for Prescott to meet up with a bunch of fun KLR riders for the 3rd annual Arizona Spring KLR Ride.

But that’s for another report.

Here are some points I made note of:

· No real need to exactly follow the AZBDR tracks. Some of the trails are washed out or not as interesting as others nearby. The ride is yours to explore.
· Camp as much as possible; it’s really a great part of the riding experience. Pirate camping is best.
· Make sure your bike and medical insurance is up to date and available.
· Be familiar with the GPS tracks, your GPS unit and your AZBDR map.
· There is no such thing as too much planning.
o Talk to your riding partner(s) about contingency plans.
o What to do in a medical emergency, a mechanical failure or a personal issue: Stay together? Continue riding? Return? Plan ahead.
· Build in enough time to enjoy the ride.
o If you’re pressed for time, you might want to reschedule the ride. One of the best parts of the ride are seeing the scenery and talking to folks along the way.
o Set up camp before dark so you can talk about the day’s ride. And plan for the next day’s ride.
· Gas in Arizona is less expensive than in California. Yup. 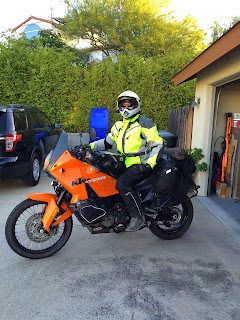 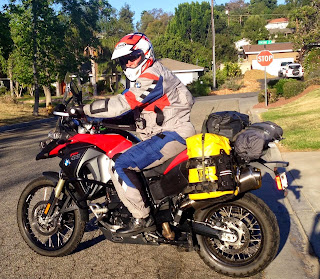 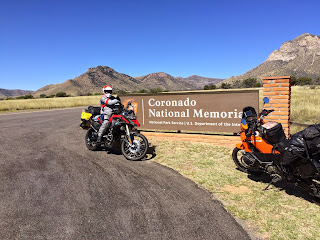 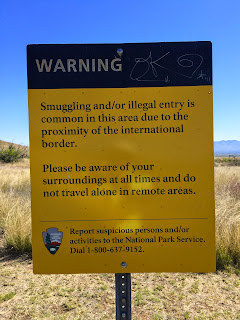 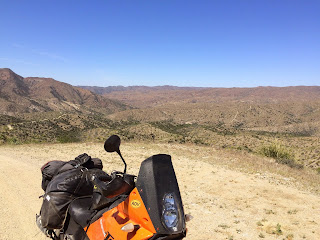 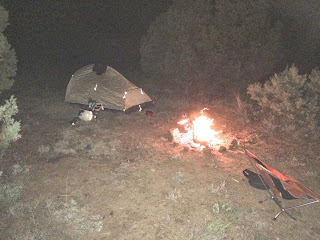 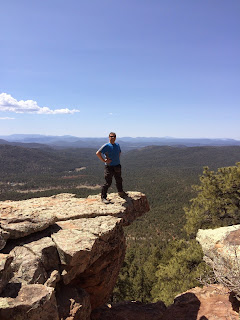 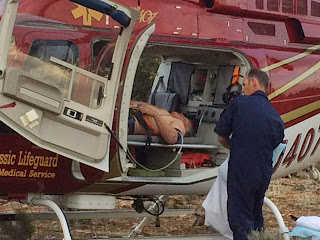 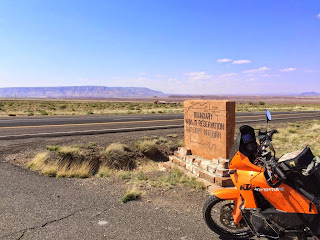 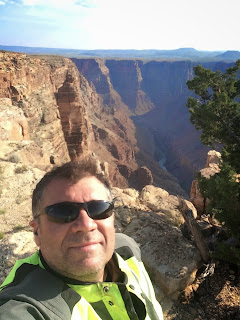 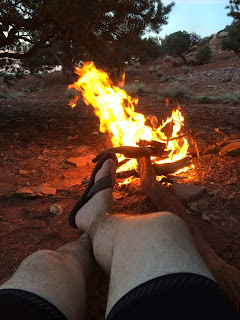 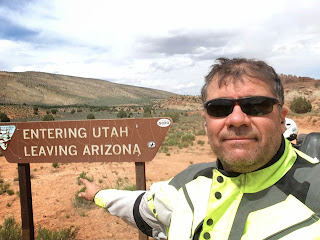 · Miles traveled: 2,562 (approximately 820 of those were off road miles)
· Highest elevation: Just under 9K feet (near Flagstaff and Bitter Springs
· Lowest elevation: -75’ (New River @ the I-8)
· Number of times I contacted emergency services: 2
· Number of times we dropped our bikes: 4
· Number of times I removed my front fender because mud stopped my front wheel from moving: 1
· Number of times I was advised by SDAR members to install the high fender kit because mud would stop my front wheel from moving: 10+
· Flat tires: 0
· Bent rims: 1 (slightly)
· Hotel vs campsite stays: 8/2, respectively (hospital stays not included)
· Gates opened/closed: 8+
· Shirtless hippies riding lawnmower-engine mini-bikes in the middle of nowhere: 2
· Law enforcement “encounters”: 0
· Highest riding temperature: 89
· Lowest riding temperature: 41 (colder at night)

I'm packed up and ready to roll. A friend and I plan to tackle the Arizona Backcountry Discovery Route (AZBDR) starting tomorrow. Here's the link: http://www.backcountrydiscoveryroutes.com/AZBDR

The AZBDR is the fourth route developed by the Backcountry Discovery Routes organization for dual-sport and adventure motorcycle travel. This scenic 750-mile south-to-north route crosses the state of Arizona beginning at the Mexico border and finishing at the Utah border. The route has been created specifically for dual-sport and adventure motorcyclists who are interested in exploring Arizona’s remote backcountry. It utilizes many remote dirt roads and leads riders through iconic locations including the Mogollon Rim, Sunset Crater National Monument, Grand Canyon and the Navajo Nation, as well as the historic mining towns of Tombstone and Globe, AZ.

Free GPS tracks, a digital map and the route's FAQ and photo gallery are located on the website.
Posted by Dan Diego at 5:13 PM