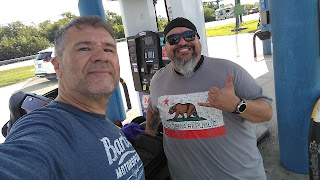 My good friend Julio asked me a few years back if he should buy a motorcycle. And since he had two young daughters still in the house, I said it would not be a good idea and I recommended against it.

Well, fast forward to 2021: He ended up getting not only his motorcycle endorsement but he bought two motorcycles in rapid succession.

I should mention that he’s currently working and living in New Delhi, India, and he rides a Royal Enfield Meteor.

I’m amazed that in the short time he’s been riding, he’s done some truly incredible rides all over that part of India, to include some serious mountains.

He sometimes rides with a large group of coworkers and sometimes just by himself. I gotta say, I’m extremely impressed at how he’s taken to the Motorcycle Lifestyle.

Anyhow, he called me a couple of weeks ago and said he’d be in Florida for a cruise and suggested meeting up for a ride.  I readily agreed so he rented a Harley Ultra Classic in Miami and we planned to meet somewhere in the middle.

I rode down from Tampa and met him near Everglades City this morning.  When I rolled up, the smile on his face told me he’d already had an enjoyable ride on old Highway 41 (TaMiami Trail) and was ready to ride some more.

We continued west on the 41 toward Marco Island.  It started out being a pretty nice day, actually— not too hot at all—but it was soon to hit 90° plus.

Sadly, just a few miles up the road we came upon a motorcyclist we’d earlier seen gassing up at the station where we met, a female who had dumped her bike and had been taken to the hospital.  Her mangled Sportster was on its side and nearby were her helmet and the clothes they had cut off of her.  Very sad to see that but a sobering reminder of what can happen.

We stopped at a small bar and grill—a dive bar, really (The Sand Bar), on Marco Island and had an early lunch. We laughed a lot as we caught up on work and old friends and other things…but mainly talked about motorcycling.  What a great time.

I had roughly planned out a ride for us along the coast but I hadn’t done a very good job of it and it turned out that the island I wanted to ride over to was not 20 miles away like I had thought —it was more like 75 miles away.   Julio said he had the entire day so we took the 41 part way up and and then I-75 north the rest the way up to Sanibel and Captiva (San Cap) Islands.  It wasn’t too busy so we rode all the way through Sanibel and over to the tip of Captiva where we stopped at another bar and grill near the water.

It was a pretty day but a hot day.  We ordered cool drinks and enjoyed the air conditioning while we talked about the day’s ride.  I told him I was amazed at how good of a rider he was since he was such a new rider.  He explained that riding a motorcycle in India is like a baptism in fire: If you can rider there, you can ride anywhere! I suppose that must be true because he really is a competent rider.

I had 125 miles to ride to get home and Julio had almost 175 to get back to Miami.  We gassed up near Ft. Myers and said our goodbyes.  It was a full day of riding and I sure didn’t want it to end. As I was leaving, he reminded me of his invitation to visit he and his wife in New Delhi.  World class riding, indeed and it’s definitely on my bucket list. 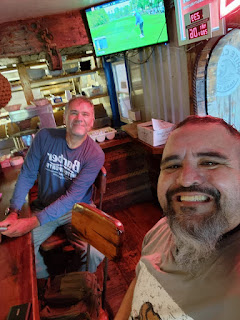 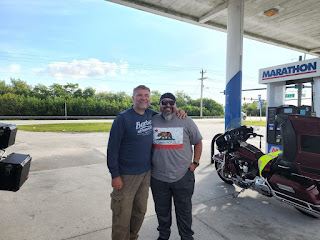 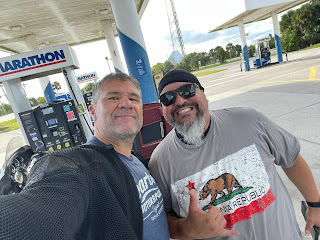 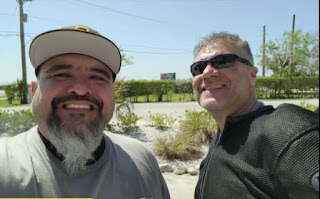 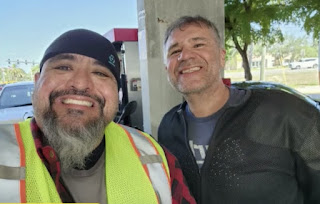