Ah, what to do for a long MLK weekend? Hmmm, nothing to do on a Saturday with rain on the way next week. OK, now for that 10,000 mile ride (Four Corners of the USA) in May. Gotta try out my new Aerostich RoadCrafter before the USA 4 Corners ride scheduled for later in the year. Big Bear!

I hit the road on my 2009 Triumph Rocket III Touring at 11 am from La Mesa (outside of San Diego, CA) with a full tank of gas and iTunes playing through my Cardo-Scala Q2 (not great, but it kept me company).

The weather was sunny and brisk as I put her in 5th. A short jaunt down I-8 west to the I-15 north and my Rocket was indeed purring over miles of concrete slab.

MapQuest claimed it would take me 3 hours? Pffft! It wasn’t likely they knew I was straddling 2300cc of British engineering. I was heading up CA-330and CA-18 with snow in sight within 1 ½ hours (130 miles later). 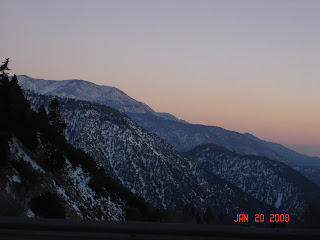 The “snow chains required—no exceptions!” sign caused me little concern as I zipped up the twisties.

Traffic was light considering all of the families out for a snow day. There was snow on the ground at 6,000 feet, and it was chilly at 7,000. The passing lanes every couple of miles allowed me to pass drivers who insisted on driving the speed limit. Strange, but I saw only three other bikes while heading to Big Bear Lake City; unusual for a nice—if frosty—Saturday.

I reached the cute little downtown area as my odometer hit 148 miles—just about 2 hours. After a quick drink and a snack, I put on a few more pieces of cold weather gear while filling up at a local station. My face, feet and hands were a bit cold, though the RoadCrafter held up better than expected.

The road back to San Diego was uneventful—freeway driving usually is. Reaching home 2 hours later I realized, happily, that I’d achieved 45.5 MPG overall.