What I know about Van Horn, Texas

I don't know a lot about Van Horn, but I wanted to tell you what I observed in the past 24 hours.

According to the United States Census Bureau, the town had a population of 2,435 in 2000, with a total area of 2.9 square miles. From the looks of it, 1,435 have departed for other, better places and the remaining 1,000 denizens are all related in some way.

This photo must be old, as at least two of the establishments shown (Best Western Hotel and GoodYear Auto) have since closed down. I noticed that at one of the closed down gas stations, the last sale on the rusted pump reflected 20 gallons of gasoline for $26.00. Not too shabby.

The folks here are pretty nice. Everyone is quick to talk to strangers and ask them why they're in town. The local citizenry asks lots of questions about how much motorcycles cost, why a traveler would come to Van Horn and other questions that require no answers...just sad chuckles.

The townsfolk that I met were eager to share stories, often painfully personal, about the other townsfolk with whom I'd interacted. I did not know that the tow truck driver was a philandering drunk who had swindled friends and family members out of money. I had no idea that the mechanic drank too much and was probably too hungover to come into work. How could I have known that I stayed in the wrong hotel in the worst part of town? The tow truck driver brought me to this hotel as his cousin worked here and would give me a discounted rate (how much can you discount $29.95, really?). And the "good" part of town has yet to be seen. Truth be told, I haven't walked the entire 2.9 miles yet, so maybe it gets a lot better. 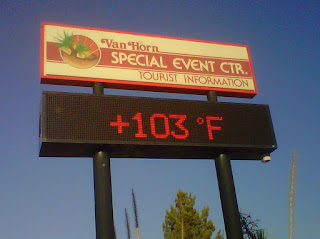 It's hot in Van Horn and that may be why everyone left or is planning to leave. The die-hards can't explain what drew people here in the first place. Was it oil? Minerals? What would make people want to come -- and more curiously -- to STAY here? I could find no tangible answer to this mystery, even after asking several locals. The interviews did reveal a lot about the other townspeople, though.

Since it appears that not many families have swimming pools at their houses, they often use the hotel pools. I observed three families (actually six families arrived in 3 cars) enjoying a day at the pool of the hotel where I was staying. They brought picnic items and music and parked their cars directly in front of the pool area. Later, when it hit 102 degrees, more of their friends arrived to the delight of the actual hotel guests.

There are large, corporate gas stations on both ends of town, right off of the freeway exits. Those attract lots of travelers looking to get out of the heat and gas up as they get going east or west into more hot desert. The gas stations attract the locals, too, who congregate at the restaurant areas, much like you or I would meet at a local eatery. Entire families line up behind rolling hot dog machines and eat standing up near the gas pumps. They look at the travelers coming in and going out and don't say much unless approached.

TRAVELER: "How far is it to El Paso?"

LOCAL: "El Paso, Texas? My sister is in El Paso. At least she WAS. Ain't heard from her for two years. TWO YEARS, can you believe that? Over a lousy 50 bucks, too."

LOCAL: "Oh, yeah, it's like a hunnert miles, but you wouldn't know that from her visits. She married some cop or something and they moved out of here. Bet she doesn't need that 50 dollars now."

And that's a common theme in Van Horn. Heat, people leaving, people talking about others leaving. Stuff like that.

Anyhow, that's my impression of Van Horn. But I don't know much about it as I was only passing though.
Posted by Dan Diego at 7:24 PM