Riding San Diego's eastern backcountry with my brother -- on KLRs! 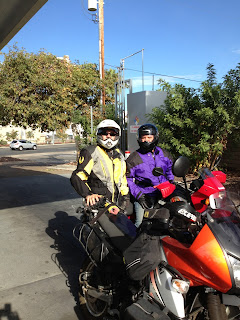 I rode this most excellent route through some great East County backcountry with my brother today. It was a a fairly easy loop, about 125 miles roundtrip, from La Mesa, CA. Although it was kind of hot and stuffy--and the route was mostly paved--it was a special ride because I don't ever recall riding motorcycles with my brother. And we were both on KLRs! 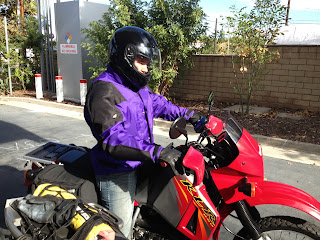 This big loop through San Diego's east county backcountry started and finished in La Mesa, CA. We topped off the gas tanks at about 9 am and headed east for about 2o miles on the I-8.

This route included the very cool if somewhat uneventful Viejas Grade ascent, a gravel and dirt road which is a wonderful alternate to riding on I-8 to the south. The Viejas Grade starts behind the Viejas Casino and climbs to the top of the mountains immediately west of Descanso. It's a gradual climb with some sharp turns and well-graded gravel (not too deep). 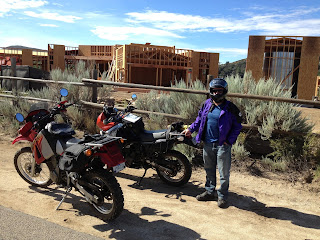 The route then goes through Descanso, Guatay and Pine Valley, continuing to the little known and truly EPIC Pine Creek Road.

Made for cars but most often used by cyclists and hikers, Pine Creek Road is a one-lane trail that climbs into the Laguna Mountains offering fantastic scenic views. If you enjoy seeing Manzanita like I do, then you're in luck as there's plenty of it. The sights and smells just added to the beauty as we sped along the narrow trail (really just 2nd and 3rd gear stuff) . I kept an eye out, but we encountered no oncoming traffic (we did pass one car moving slowing and saw 3 or 4 others camping along the route)). Even though it was a bit hot and humid for most of the ride, it really cooled off when we hit 5,000' elevation. 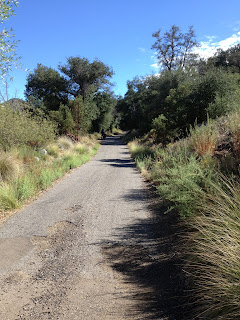 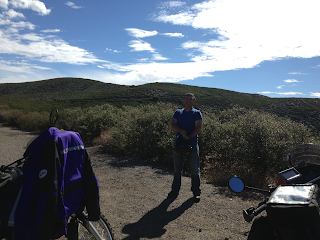 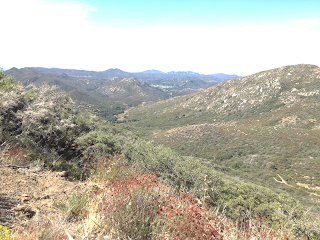 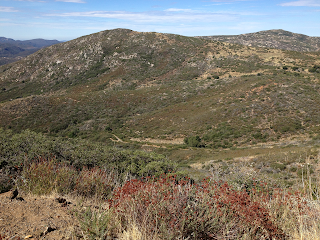 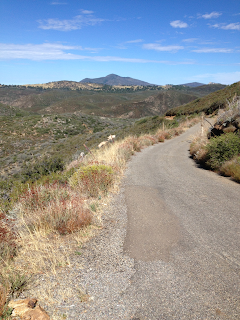 We reached Sunrise Highway (S-1) at the top after about 6 miles. We took a left and headed north toward Julian. Again, we were treated to some nice views to the east--this time of the desert floor, all the way to Borrego.

Once we reached the 78/79, we took a left and headed toward Cuyamaca (instead of turning right which would've brought us into Julian).

Reaching Lake Cuyamaca 3 miles later, we turned right and headed up into the hills on the infamous Engineers Road-- a real "get to know your bike" kind of road. Engineers Road winds in and out of some picturesque countryside, ascending and descending along the sides of the mountains. We passed several cyclists but no cars.

Eventually, we arrived to the 79 and went left toward Ramona. There were quite a few bikers out and everyone was waving and smiling...hot day or not.
We passed through Ramona, went back up through the hills making quick work of the 67, passed through Lakeside and Santee as we made our way south toward the I-8.

We arrived back in La Mesa where we started 3 hours earlier after about 125 miles.
This was a really great ride and I highly recommend it for a not-too-challenging but very fun "mostly" on-road ride (we rode through less than 7 miles of non-paved roads).

Pro tip: The Viejas Grade is fairly easy to find. Exit the I-8 in Alpine at Willows, then continue east on the north side of the freeway. Veer left shortly thereafter into the Indian Reservation. Follow that road until it becomes Viejas Grade and turns to gravel - head uphill toward the summit (gravel for about 6 miles).