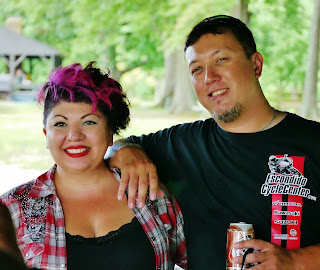 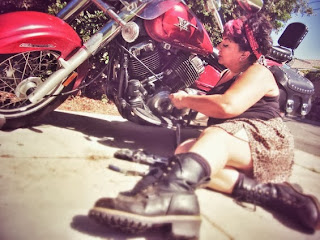 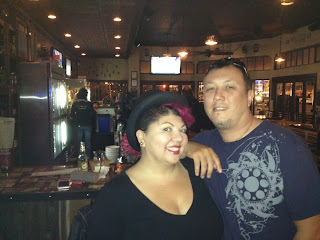 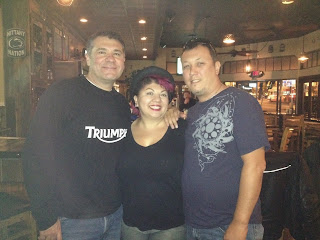 As part of a series of interviews I’m doing with fellow MC bloggers to see what makes these motorcycle enthusiasts tick — why they ride and why they write about it — I sat down with two local motorcycle enthusiasts/bloggers at a local gastro pub last night. Having just watched a most excellent motorcycle documentary (Why We Ride), I knew ahead of time I’d like these two.

I’ve heard it said that money is the great equalizer; we agreed that motorcycles are actually better for finding commonality in different people.

Tina Walker and Steve Johnson, AKA: Sash and Highway, are quite the couple. Though only married last year, they go together like matching leathers. Throughout the evening, I could see they both had the biker jones…it was a pretty thing to see. I came prepared with lots of questions, but we actually just sat and talked bikes and people and philosophy and our folks. Like many motorcycle enthusiasts, they’re easy to talk to…

Steve and Tina recently wrapped up a nice little 6-month ride referred to as the Road Pickle. For some of the amazing people they met and things they saw, see their blog at www.RoadPickle.com. There is some really nice photography, as well.

They both follow many of the same blogs I follow: The Great Motorcycle Pizza Tour, Flies in your Teeth, Arizona Harley Dude, Ribbon of Highway, Biker Chick News, The Moto Lady, Trobaritz' Tablet, The Motorcycle Obsession, Riding the Wet Coast, The Motorcycle Diary, Riding the USA, Live Free Ride Hard, Introduction to the Harley and Maiden Leather Designs. Steve’s are mainly philosophical in nature. He’s a profound guy, so that’s no surprise. JMADog is a good one.

I asked each why they began blogging. Tina, who’s been writing for most of her life, said blogging about her passion to ride was just a natural transition. She loves sharing her point of view because frankly, there aren't that many women who ride, by comparison. She’s found that many female riders blog! Steve’s main focus is on business and personal expression.

Publishing motorcycle blogs is just part of what they do, but she reminds me it's the BEST part! Her business is Too Much Tina Media (www.TooMuchTina.com), helping business owners and bloggers with their internet presence. They specialize in public relations, marketing, sales and internet publishing, which in this "web-world" really all ties together.

We discussed our riding experiences. Tina rides a Yamaha V Star 650, and Steve has a 2006 Honda ST1300, a bike he considers dang near perfect for what he needs. Although the BMW RT1200 is a fine bike, too!

Tina put 13,000 miles on her first bike — a Kawasaki Ninja 500— in the first 6 months of owning her…that’s some serious riding. Steve’s parents bought him a 1979 Kawasaki KZ400 after he graduated high school –
his sole transportation for 3 years. Between that and his current bike, he’s gone through a 2004 Yamaha Road Star and TWO 2005 Harley-Davidson Electra Glide Ultra Classics.

We spoke about riding solo and with others and agreed that while riding with a couple of others is fine, being alone with your thoughts is a great thing. Steve began waxing philosophical and most eloquently stated that he’s always alone when he rides—whether in a group or alone. Maybe we all feel that way.

I was not surprised at all when Tina said that she loves riding more than she ever thought she would and
at this point, that's all she wants to do. Day and night, if she’s not riding, she’s sitting around wishing she was. I love that!

Apart from his recent 6-month ride, Steve did a month-long ride from San Diego to Fairbanks, AK and back a few years ago. He’ll be heading back out on the road in early 2014 across the country, probably for 10 months or so. I’ll be following along on Road Pickle.

After a couple high-proof craft brews, it was time to go. Steve left me with this thought:

I'm trying to live with less, and in doing so, put the focus on the person inside. Be more transparent, be honest with myself. Be a motorcycle rider 24/7, not just on weekends and not just when it's convenient.