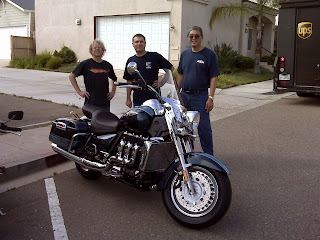 The news that a local motorcyclist was killed when he was involved in an accident with a San Diego Police Department vehicle was tragic; it was worse when I read the name … Mark Griffin McCaffrey. I held my breath as I searched for more information and was sad to learn that it was indeed Mark, the owner of Rocket Motorcycles.

Mark was a super cool guy with tons of riding experience. He was friendly, knowledgeable and responsive to bike riders who would filter through his shop on Morena Blvd. My first interaction with Mark was in 2009, when I wanted a new bike and settled on a new Triumph Rocket III. I called and spoke with Mark at Rocket Motorcycles on a Sunday. The shop was closed, but Mark answered and we spoke about pricing. We had a great conversation about what he could offer and said someone would call me on Tuesday. Sure enough, Lance called me and we worked out a tentative deal, much lower than any other place within 150 miles. It wasn’t until later that I realized that Mark was actually the owner. Now that is service! 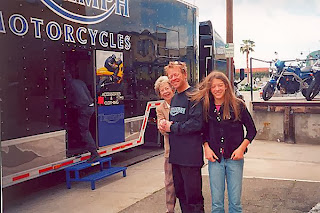 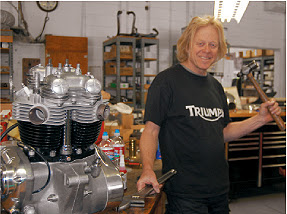 The bike – or “parts” of a bike — arrived in a crate from England and Mark e mailed me a bunch of photos of the guys uncrating and assembling my bike. Very cool of them.

Since then, I visited the shop for routine service and just buying stuff. The guys are laid back, that's for sure. Mark always came out to chat and just offer his support—that was the kind of guy he was. They don’t make them like Mark anymore and he will be sorely missed by the San Diego motorcycling community.

Mark was one of the nicest people around. He will be missed. His 3 children (all young adults) say they will continue to ride. Be safe out there, folks.

Rest in peace, my brother.

The officer was driving westbound on Balboa Avenue about 7 p.m. when he got a call to provide emergency cover, San Diego police Officer Dino Delimitros said.

The officer was not injured. Other details were not available as police continue to investigate.

Balboa Avenue was shut down in the area.

SAN DIEGO — A motorcyclist who died following a collision Monday night with a San Diego police patrol vehicle in Clairemont has been identified by the Medical Examiner’s Office as Mark Griffin McCaffrey, 62.

The officer radioed for medical help and paramedics arrived shortly afterward. McCaffrey was transported to a Sharp Memorial Hospital. Advanced life-support measures were initiated, but he failed to respond, the investigator said.

San Diego police Lt. Kevin Mayer said Tuesday that police are waiting for the results of a California Highway Patrol investigation of the collision.

“Our thoughts and prayers go out to the family at this difficult time,” Mayer said.
No hometown was listed for McCaffrey.


Here's the report from the Medical Examiner web site:

Case Number: 13-02625
Name: Mark Griffin McCaffrey City of Residence:
DOB: 05/02/1951 Gender: Male
Place of Death: 7901 Frost Street, San Diego CA
Place of injury: Intersection of Balboa Avenue and Mt. Everest Boulevard, San Diego CA
Date/Time of Death: 11/18/2013 8:21:00 PM Date/Time injury: 11/18/2013 1906
Summary: The decedent was a 62-year-old Caucasian male who on November 18, 2013, was traveling in his motorcycle eastbound on Balboa Avenue within speed limits. At the same time, a San Diego Police Officer initiated pursuit on a suspected hit and run vehicle. With lights and sirens on, the officer made a U turn in front of the decedent. The decedent applied the brakes but was unable to avoid the collision. He was ejected from the motorcycle and the officer radioed for medical help. Paramedics arrived within a short time and the decedent was transported to Sharp Memorial Hospital where advance life support efforts took place. Death was pronounced when the decedent failed to respond.
Cause of Death/Updated Cause of Death: Multiple blunt force trauma
Contributing Conditions: None
Manner: Accident
Investigating Agency: San Diego Police Next of kin notified? Yes