Getting to know my fellow motorcycle bloggers is something I really enjoy doing. I’ve had the great pleasure to meet and ride with several friends I’ve met while blogging about something we all find interesting: Riding and writing about bikes. 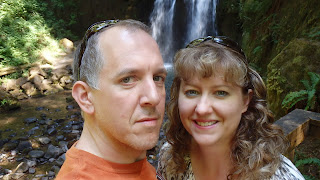 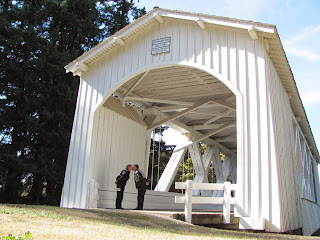 Today I would like to introduce you to two motorcycle enthusiasts that hail from the Great Northwet. That wasn’t a typo as I spent five wet years in Oregon! Like the two bloggers I recently profiled—Steve and Tina—Brad and Brandy are also a couple.

I’ll say right now that a characteristic that many of the motorcycle folks I’ve met shared is humor…and these two are no different!

Brandy and Brad each pen blogs you will likely recognize: Troubadour on a Tiger and Trobairitz’ Tablet.

What started Brad’s blogging career was an online search for local motorcycle blogs and forums for something to read during lunch breaks at work. After several months of reading “Musings of an Intrepid Commuter” and other blogs that author had linked on his sidebar, Brad decided to try his hand at writing his own blog to document his rides, trips, trials and tribulations. When he first began writing — mainly as a way to remember the rides and post photos — he never expected to be doing it for so long or to have so many readers. And Brandy and Brad definitely have quite a following.

Brandy once rode on the back of Brad’s bike and has since began riding her own bike and writing her own adventures via Trobairitz’ Tablet. Serious foodies may be interested in Brandy’s food blog, Trobairitz' Table d'hote, where she posts vegan recipes and photos of her delicious meals, desserts, cookies, pies and goodies.

I asked them which blogs they actively follow. The response was no different from the other riders I’ve spoken with: Too many to list! Like my friends Steve and Tina, Brad no longer works in an office (lucky dog!). Since he doesn’t have access to a computer during the day, Brad relies on Brandy to stay updated on what’s going on with everyone.

I will mention here that I recently watched the new motorcycle documentary titled “Why we Ride.” Many parts of that film, like our first riding experiences, were very recognizable to me and others in the audience. I laughed at the large number of riders who said that, “minibikes” were their introduction to the world of two wheels. And it appears that Brad is no different. His first riding experience was on a friend’s Sears-type mini bike…and he was hooked! He recounted memories of hanging out at the local dirt riding area and bumming rides from the older kids. He and his brother pestered their parents until Santa finally brought them a Yamaha Enduro 80 for Christmas – which he rode into the ground. Brandy grew up riding on a pillow strapped to the rear rack of her mom’s Honda Trail 90. She took the controls of her brother’s bike once and discovered that riding pillion was best.


Brad rides his (infamous) 2005 Triumph Tiger 955i and Brandy has a 2009 Suzuki Gladius; they share a Yamaha XT250 dual sport that you’ll recognize as covered in mud on one of his recent posts!

As far as previous bikes, Brandy started on Brad’s KZ900 before buying a Honda Nighthawk 250. She owned a Ninja 650R and a Suzuki TU250X before settling on her current steed. She tried real hard to fall in love with a pretty blue and white 2009 Triumph Bonneville SE, but it was not meant to be. Brad’s first street bike was a ’75 Honda CB750 Four and then an early 80s Suzuki GS550, an ‘84 Honda Magna V45, then a ’76 a Kawasaki KZ900LTD (which he recently had the good fortune to buy back – oh how I wish I could find some of my old bikes!), another Honda Magna V45, a 2001 Triumph Sprint ST, then an ’07 Triumph America.

When asked what would define the “ultimate” bike, Brad agrees with others I’ve spoken with in stating that there is no such thing. With all of the Tiger’s quirks and idiosyncrasies, he knows what it’ll do and what he can expect from it. Like many of us, he would like other bikes: a scooter, a Ural sidecar, an FJR, a Tiger 800, an FZ-09 and a Honda Grom all for different reasons and moods. Ah, don’t we all…

Brad stated that he’s proud to be a part of Team Oregon Motorcycle Safety Program (http://team-oregon.org/) and a member of the American Motorcyclist Association (I’m AMAzing, too). He started a local bike night several years ago that has evolved into a local forum and created a fantastic network of fellow riders, many who are now very close friends and are much like family. He says the same thing for the blogs; they’ve met many great people online and hope to meet many more.

Brad and Brandy rarely plan rides and enjoy more impromptu rides like checking out covered bridges or go to the coast (see his site for some nice covered bridge photos). Route planning consists of pulling out a map and finding a twisty road to explore. Yup. They prefer to ride with just each other, as group rides tend to require a lot of preparation and planning. When riding together, they are free to stop, take pictures and enjoy the solitude of each other’s company.

A comment he made struck a chord with me: “We deal with noise and drama at work so to stop at a roadside picnic table for a quiet cup of tea is the best.” Well said.

Not that Brandy and Brad don’t mind a group ride on occasion, but they prefer a small, private group of friends with similar riding styles. Brad recalled the IMBC2012 (International Moto-Bloggers Convention) as a memorable ride where several other bloggers all rode to Baker City, Oregon to meet up and ride Hells Canyon for the weekend.

Want to know a little more about Brad and Brandy? Well, how about this gem, straight from the LoneBiker dating site description? We like long walks on the beach, coffee, chai tea and independent films. Must love cats, motorcycles, music, and have a sense of humor and quick wit. Ah, yes, my kind of people! (Except for the cat thing.)

I hope you’ve enjoyed getting to know some of our fellow bloggers a little better. I’ve found that although we come from (often vastly) differing backgrounds, we all meet in the middle somewhere—and usually on two wheels.