Dawson to Eagle, Chicken and Tok 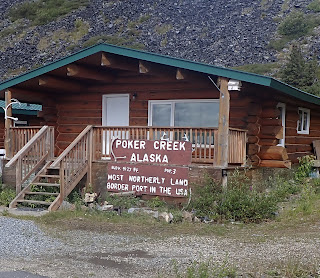 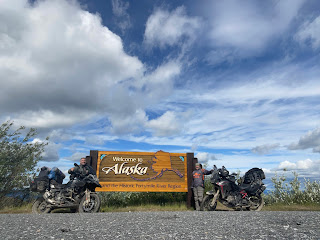 Thanks We left Dawson at about 9 o’clock yesterday morning and caught the ferry across the Yukon. Very  interesting and it only took about 10 or 12 minutes total including the wait. While on board the ferry, Steve saw a large animal— likely a moose— swimming all the way across.

After about 60+ miles of dirt road we came to the Poker Creek immigration checkpoint, referred to as, “The most northerly land port in the USA.”  The process was quick and easy and we were on our way in under a minute.

Then, not too much longer, we veered north on a 65-mile dirt road that took us to the small village of Eagle right on the Yukon River. We filled up on gas, took a look around, got a bite to eat and got right back on the road.

Eagle was a mission for me.  I wanted to leave something of my father’s there.  Like me, he was a traveler and we spoke of places we’d been and places we wanted to see.  He always wanted to see Canada and Alaska, and Eagle was a place he would’ve really enjoyed seeing.  I thought of him the entire way there and back.

A quick 65 miles later we reached the highway. And still on a dirt road, we went another 30 or 40 miles over to Chicken. Note: I skipped this little town when I came through here in 2014 because it was too touristy for me.  And after one beer at their saloon, I was reminded of why I really didn’t care for this place. Yes, it has a lot of history and yes it’s very kitschy, but it just wasn’t for me.  On a positive note, we took a look at a large dredge from the late 1800s/early 1900s and we were on our way again.

For those taking notes, we had done 233 miles and only three miles of that was paved.

Shortly after leaving chicken we got onto a paved road, although it was just really terrible. I’d like to meet the joker who put up the sign that said, “Rough road next 4 miles,”  because he really should’ve apologized for the previous 200 miles of truly poor road.

We rode another 75 miles into Tok, had dinner at Fast Eddie’s, and rolled over to Thompson’s Eagle Claw campground where I also stayed in 2014.  Vanessa was there waiting for us showed us to our cabin and turned on the woodfired sauna for us. We decided to stay in the cabins as there was a light rain we did not wanna unpack all of our gear.. so we just pulled our bikes up to a rustic cabin and did that for the night.

Our overall mileage for the day was 333 miles.