We departed Fairbanks yesterday headed for the Arctic Circle for the ubiquitous photo. But just as we hit the Dalton Highway,probably about 100 miles before the Arctic Circle, Steve looked over and said, “I’m feeling it.” And by that I knew he meant we’re going to Prudhoe Bay—Deadhorse—on the Arctic Ocean.

And so we did: We rode to the Arctic Circle, snapped the photo, then continued up to Coldfoot, which is about midway on the 500+ mile Dalton Highway…also referred to as the Hail Road.

In Coldfoot, we fueled up it was the last time we’d be able to get gas for 240 miles. It was just after departing that the weather turned bad… and on the Dalton Highway, you shouldn’t be riding that road if the weather is bad…and it was really bad.

The road, mainly dirt and gravel, turned to a slick mucky mud that cling to everything—bikes, riders and our gear.  Going was slow, mostly 2nd and 3rd gear.  Every once in a while there’d be a sign notifying us of “Rough Road Ahead” or “Motorcycles use extreme caution.”   Good info, thanks.

Going over the Atiguin Pass was something.  Cold, rainy and the road wAs 3” of slick mud.  Pretty, though.

The temperatures never got above the 40’s so that was nice.

Long story short, we arrived to Deadhorse just before 10pm. No restaurant or other place to get food was open.  The only hotel was closed and a “work camp,” basically a small room with bathrooms down the hall for oil workers, was asking $215 a night.  We chose to tent camp outside of town and the guy at the desk warned us about bears.  “We’ve been seeing a lot of bears in that camping area.  Have fun, guys!”

It wasn’t fun at all.  As soon as we set up the tents, it began to rain.  What a combo: Cold and rain and mud.  All three were all over us.

We curled up in our sleeping bags and called it a night.  Final mileage for the day: 528, the vast majority of that was unpaved.

It was 44 degrees when I woke up this morning. We packed up our tents and other gear—mostly wet, like ourselves—and rode over though muddy streets to take the famous Deadhorse photo and buy a sticker.  And then we left town en route to somewhere south.  Kinda neat, we saw lots and lots of caribou and a small fox on the side of the road as we were leaving town.

Not unexpectedly, the sun came out, the rain stopped, the rod dried up and the temperatures shot up the the balmy mid-50’s. A lovely ride.

We came up in roadwork about 75 miles out of Deadhorse.  The lone sign girl asked us to turn off our bikes as it would be 45 minutes to an hour wait.  She then proceeded to tell us that two motorcyclists dropped their bikes while riding through the mud yesterday.  I’m conversation, we mentioned we hadn’t eaten since 4pm the previous day.  She promptly came back from her truck with sandwiches, juice, hard boiled eggs, donuts and carrot sticks.  Boom!  We didn’t even attempt to decline the offer but started scarfing it all down right away.  Very friendly, that sign girl. 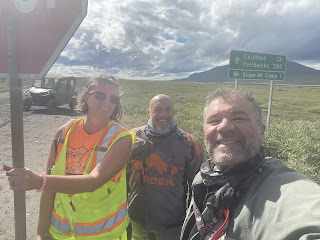 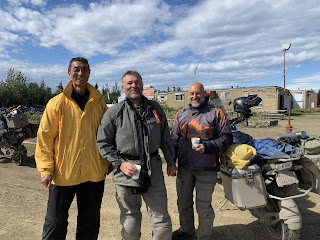 We were fortunate to make great time as we enjoyed a quite different view from the day before.  And by the way, those who say there’s nothing to see on the Dalton Highway—and I’ve heard that quite a bit—they just don’t know a thing about beauty because it is an absolutely stunning and scenic road: The mountains all snow covered, the streams and lakes, the trees… it’s just incredible, truly an amazing sight to see.

Steve and I both had slight issues with our motorcycles:  The mud clogged my radiator and it was overheating; I had to find some water alongside the road and wash off the radiator fins so it will cool down.  Steve’s fork seals started leaking from all the bumps.  Neither is a major issue.

We decided to make Coldfoot our final stop for the day. We pulled in by 4:30, fueled up, paid $14 for a shower and $27 for a buffet— that was quite good— talked to our fellow travelers, set up our tents and called it a night. 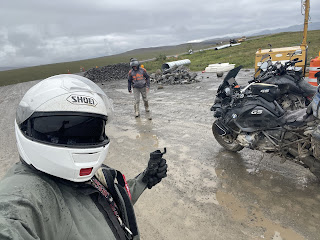 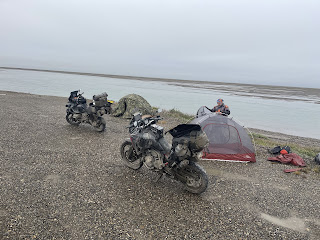 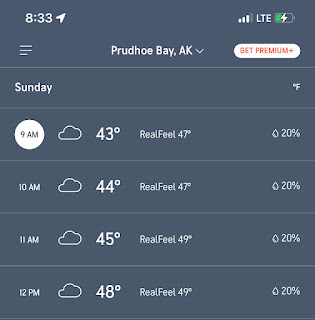 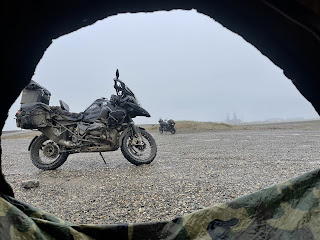 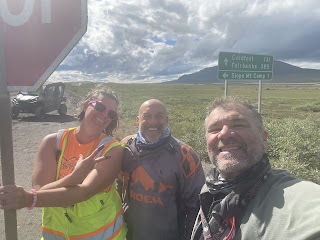 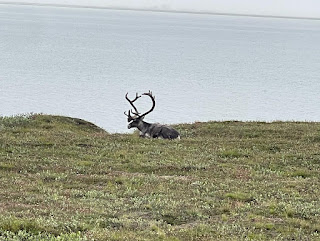 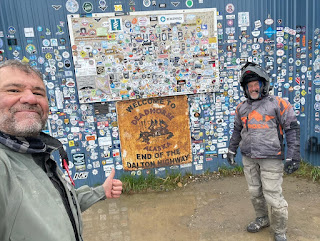 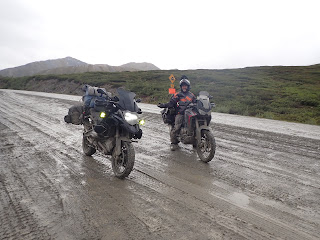 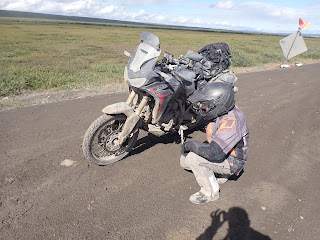 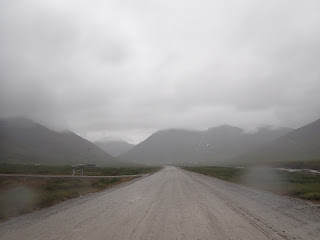 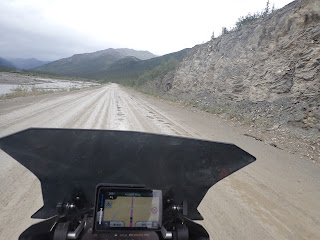 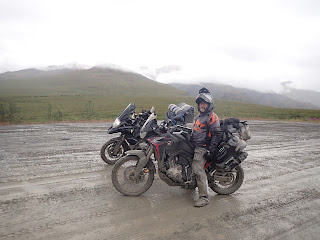