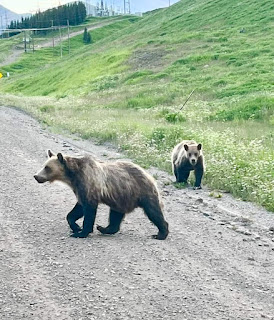 Picture this scene if you will…

We’d ridden 15 kilometers of dirt road and we’re headed toward Hinton.  It was then that two good-sized grizzlies came down a hillside to the road, not 25 yards from us (that’s 22.86 meters to our Canadian readers).  I stopped my bike, jumped off and took out my camera to capture the moment.  Just then, I heard my 1,000 lb. bike fall to the asphalt.  The grizzlies stopped and turned toward me, not 20 yards away.  I was screwed.  They stood there and looked at me as I considered my options.

Just then, I saw Steve running away from his bike and toward me and the grizzlies.

Then, on second thought, I yelled, “Wait! Get this photo!”

There I was, next to my fallen bike, between Steve and the two bears.  I saw Steve taking photos as I moved away from the grizzlies and toward his bike.

Nothing personal, Steve, but I fully intended to take your bike and ride to safety.

Just then, the two bears lost interest and sauntered away from us…down the road and into the opposite woods.

We high-fived, lifted my pig of a motorbike, and continued on the way.  Not a hundred yards later, another bear crossed the road in front of us.  Then, a mile later, we spotted a big moose and her calf right on the edge of the road.  Just amazing stuff.

A while later, a big fat bobcat with a rabbit in its mouth crossed the highway in front of us.  So Canada. 🇨🇦

Spoiler alert, we did not get photos of the bears or the bobcat or my frightened face, but I was able to snap a few photos of the moose.

Since we’re running out of wildlife to see, The Contest was ended.  We still have black bears, elk and caribou to spot, among other big animals.

Also, we are tied now, with regard to dropping our bikes. 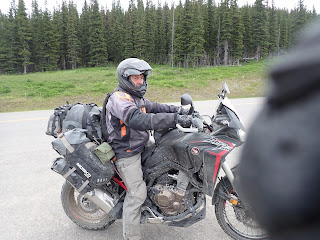 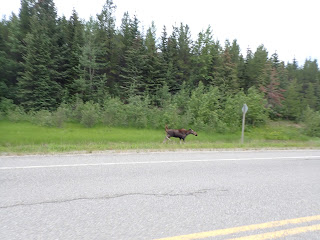 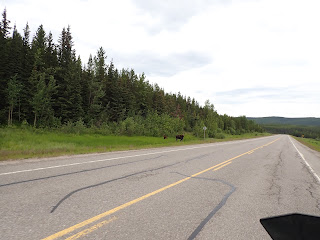 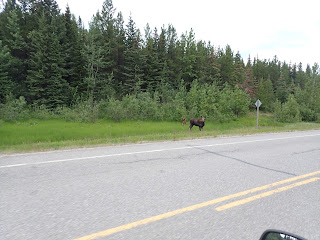 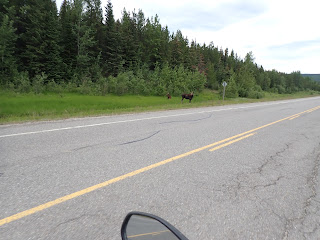 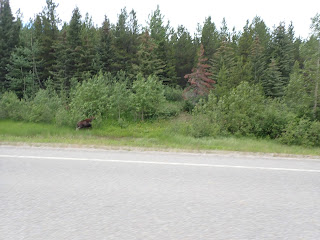 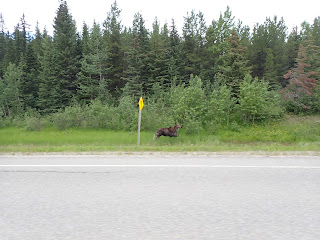