Let me tell you about The Alaska Highway 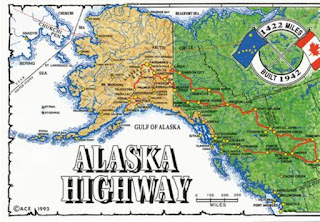 War brings out the worst and best in people.  Necessity does that, too.  And those two things came together to get the ALCAN Highway built in record time.

The Alaska Highway, also known as the Alaskan Highway, Alaska-Canadian Highway, or ALCAN Highway, was constructed during WWII to connect the contiguous US to Alaska across Canada.

It begins in Dawson Creek, BC, Canada and runs to Delta Junction, Alaska via Whitehorse, Yukon, Canada. The road was originally built mostly by the US Army Corps of Engineers as a supply route during World War II.

The Americans preferred Route A, starting in Prince George, northwest along the Teslin and  Tabish Lakes, and from Whitehorse to Fairbanks. However, the route was vulnerable to possible enemy attack from the sea, experienced steep grades and heavy snowfall, and had no airbases along the way.

The Canadians favored Route B, also starting at Prince George, but followed the Rocky Mountain Trench then north to the Yukon. From there it went to Dawson City to connect the to Fairbanks.

Route C, advocated by the US Army Corps of Engineers, was the only practical one. It was far enough inland from enemy planes and it linked airfields that conveyed lend-lease aircraft from the United States to the Soviet Union. This option encountered more level terrain, not ascending a pass over 4,250 feet.  It followed the Rocky Mountain Trench toward Dawson City before turning west to Fairbanks.

The official start of construction took place on March 9, 1942, near Mile 0 at Dawson Creek.

Construction accelerated through the spring as the winter weather faded away and crews were able to work from both the northern and southern ends; they were spurred on after reports of the Japanese invasion of two islands in the Aleutians.

The entire route was completed October 28, 1942, with the northern linkup at Mile 1202, Beaver Creek.

When it was completed in 1942, it was about 1,700 miles long, but in 2012, it was only 1,387 miles due to the continuing reconstruction of the highway, which has rerouted and straightened many sections. The highway opened to the public in 1948.

In 1942, the Army Corps of Engineers assigned more than 10,000 men, about a third of whom were black soldiers, members of three newly formed "Negro regiments".

During construction the road was nicknamed the "oil can highway" by the work crews due to the large number of discarded oil cans and fuel drums that marked the road's progress.

1,700 miles of road constructed in under 8 months.  War, necessity.