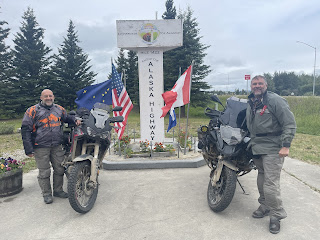 We awoke to a brisk and somewhat moist Tok. It was 46 degrees and we needed coffee.  We left the cabin a mess and rode down to a small diner to get breakfast: Mugfuls of steaming java, sourdough pancakes and reindeer sausage made for a great morning.

We rolled out of the campground after speaking with fellow riders but without seeing Vanessa.

The road to Fairbanks is only 200 miles and, like most of Alaska, was scenic. We had a few sprinkles of rain, and it was clear and in the 50’s all day.  Our heated grips were set to HIGH.

We stopped by Delta Junction, about midway, to snap photos of the ALCAN’s terminus.  It’s hard to believe that we’d started the Alaska Highway only a week ago.

There was road construction before reaching Fairbanks so we followed a pilot truck over miles of gravel.  That doesn’t count as part of the 1K miles of off-road riding we’ll be doing…

Out first stop was Trail’s End BMW, a motorcycle shop where our friend Brad used to work.  It’s not actually a BMW dealership as they service all sorts of bikes—even Harleys.  Steve needed a bolt for his exhaust and the service department just gave it to him.

While Steve was dealing with the exhaust issue, I called and scheduled routine maintenance for my Beemer in Anchorage, as well as the ferry ride from Valdez to Whittier.  It appears both appointments will be tough to keep.

From there we rode over to a Vietnamese place for huge bowls of pho.  Just perfect for a chilly day.  While we were eating, Steve booked a cabin in a ski area north of Fairbanks.  We rode over via some twisty-turny roads and checked in.  Again, these two old guys didn’t feel like tenting tonight.

We broke out what whiskey remained, charged all of our devices, prepped our gear for tomorrow’s ride to the Arctic Circle and called it a night.